More evidence that England is becoming more and more unabashedly totalitarian. Over 100 EDL members have been arrested for a pre-crime. Police concern that the EDL may respond in a provocative way to Muslims attempting to dishonour and disrupt the proceedings at the remembrance ceremony today caused them to arrest 165 or so EDL members.

Well then. Perhaps the EDL should start arresting members of Parliament in case they might do something treasonous during their term in office. Hell there are a hundred things the EDL could justifiably do once you accept the notion of pre-crime. I think it’s well past time that the government at the highest levels in the UK sit down and re-evaluate what exactly their values are. That is, if they have any left. (additional material here from the Daily Mail)

Scotland Yard says it has arrested 156 English Defence League supporters, who may have planned to target Occupy London 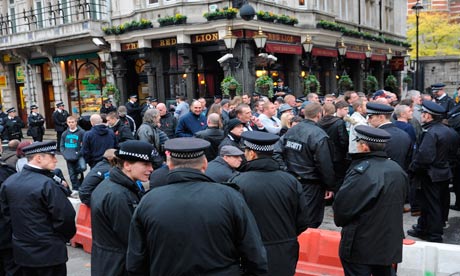 Police have arrested 156 supporters of the English Defence League in order to prevent a breach of the peace, Scotland Yard said.

It is understood the EDL supporters were planning to target Occupy LSX protesters outside St Paul’s Cathedral.

The EDL followers were arrested outside the Red Lion pub, in Westminster, and taken to central London police stations.

The arrests came after Scotland Yard was accused of sending out threatening messages on the social networking site Twitter in the runup to the two-minute Remembrance Day silence on Friday.

In a series of tweets an officer from CO11, the Metropolitan police‘s public order unit, said: “There is a policing operation in place to preserve the dignity of the two-minute silence.

“If the memory of dead soldiers is insulted where people have gathered to honour those soldiers there is clearly a threat to public order.

“Deliberately using abusive or insulting words or behaviour is an offence under section 4 of the Public Order Act.”

The tweets were greeted with outrage on Twitter, with critics accusing the Met of being intimidatory, threatening and aggressive.

Jules Carey, a lawyer who represented Lotfi Raissi, the Algerian pilot wrongly accused of taking part in the September 11 attacks, said: “This is the kind of freedom the veterans died for.”

Referring to Scotland Yard’s announcement this week that the Met had pre-authorised the use of plastic bullets in advance of the student anti-cuts rally, he added: “Are the Met about to announce that rubber bullets have been authorised for use on anyone showing insufficient respect?”

But Scotland Yard said it had issued the tweets because of intelligence that Muslims against Crusades were planning to repeat last year’s protest to burn poppies during the two-minute silence.

In a statement the Yard said: “Last year during the two-minute silence a group burnt poppies and a counter-protest was also held. This caused considerable upset to members of the public and arrests were made as a result under the Public Order Act.

“Two people were later convicted in relation to this.

“Intelligence and information suggested a similar incident may occur this year. The tweets sent out from the CO11 Twitter account were intended to warn against this.”

As the morning progressed, however, there was no sign of anyone from Muslims against Crusades – the group which was proscribed by the home secretary, Theresa May, on Thursday.

Instead police moved in on a large group of EDL supporters and made arrests to prevent a breach of the peace, in the belief they were going to cause trouble with protesters outside St Paul’s.

On Thursday night officers carried out searches at addresses in east London linked to Muslims against Crusades under the Terrorism Act 2000.