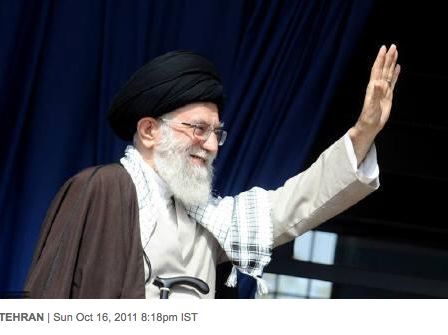 (Reuters) – Iran could do away with the post of a directly elected president, Supreme Leader Ayatollah Ali Khamenei said on Sunday, in what might be a warning to Mahmoud Ahmadinejad and possible successors not to overstep the executive’s limited powers.

Khamenei’s comment came with Ahmadinejad battling constant criticism from hardline conservatives accusing him of being in the thrall of “deviant” advisers who want to undermine the role of the Islamic clergy, including the office of supreme leader.

Khamenei dropped the suggestion — of what would be the biggest change in Iran’s constitution for two decades — into a wide-ranging speech, saying there was “no problem” in eliminating the directly elected presidency if deemed desirable.

“Presently, the country’s ruling political system is a presidential one in which the president is directly elected by the people, making this a good and effective method,” he told an audience of academics in the western province of Kermanshah.

“However, if one day, probably in the distant future, it is deemed that the parliamentary system is more appropriate for the election of officials (holding) executive power, there would be no problem in altering the current structure,” Khamenei said in the speech broadcast by state television.

While Ahmadinejad enjoyed Khamenei’s full support when elected to a second four-year term in June 2009, analysts said a rift between the country’s two highest officials emerged last April when the president’s attempt to sack his intelligence minister was vetoed by the supreme leader.

Members of the conservative-dominated parliament have since threatened to impeach Ahmadinejad and the judiciary has pursued some of his allies over corruption allegations — denting his standing in the run-up to parliamentary elections in March.

Khamenei’s comments could be seen as a reassertion of his own paramount status in Iranian affairs over the presidency.

The position of president has a high international profile, but his powers are limited by other branches of state and particularly by the supreme leader who has the last say on key matters including the military and Iran’s nuclear programme.

While the supreme leader should not normally interfere in day-to-day political matters, Khamenei said, he had the responsibility to step in “under circumstances in which the adoption of a policy would lead to the diversion of the revolution’s path”.

Eliminating direct elections and having parliament choose the president would make the head of government more responsive to the legislature and might limit his scope to exert authority in sensitive areas such as foreign policy.

The last election brought vast crowds to Iran’s streets to protest at what they said was a rigged election after Ahmadinejad beat reformist candidate Mirhossein Mousavi.

The government denied the vote rigging charge and said the protests were stirred up by Iran’s foreign enemies.

Mousavi has been under unofficial house arrest since February and reformists have yet to say whether they will participate in the March elections, which will set the scene for the 2013 presidential race.