In the fine tradition of the founder of Islam himself, The Pirate Mohamed, someone who takes “Following the example of the prophet” seriously managed to pull the following off.

I remind the reader that one of Mohamed’s ‘wives’ was a women who’s real husband and sons Mohamed had just slaughtered in his taking of a Jewish city and when he saw this weeping horrified widow who had just lost her children as well, he ordered a few words muttered at her and then she was his legal property or ‘wife’ in Islamic terms.

A husband who knocked out his virgin wife with chloroform and raped her has been jailed for eight years.

The 35-year-old man tied the woman to a bed and knocked her out using the ‘obsolete Victorian anaesthetic’ on at least two occasions during their six weeks of marriage.

The woman, a Bangladeshi immigrant who was 21 at the time, had repeatedly refused to have sex with her new husband because she was too nervous.

The husband, who cannot be named for legal reasons, poured the chloroform onto a towel, pressed it over her face, then tied her up before raping her at his home in Poplar, east London.

Judge Timothy King said the rapist had regarded his wife as a ‘chattel’ he could use as he wanted.

He said: ‘The victim was a vulnerable young woman, she had made her unwillingness abundantly clear and you would not take no for an answer.

‘Her views were of no consequence as far as you were concerned.

‘Given that you used chloroform to rape her, this was very much a contrived and premeditated act in which you subdued her capacity to resist.’

The husband had denied administering chloroform and two counts of rape but was convicted by a jury at the Old Bailey with an 11-to-one majority on all three charges.

Prosecutor Richard Hearnden then revealed the man had already been found guilty of carrying out the attack in November 2009, but that the conviction was overturned. 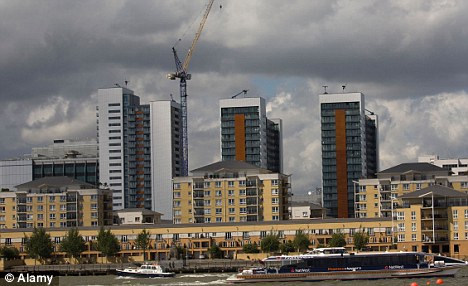 Forced marriage: The Bangladeshi immigrant had repeatedly refused to have sex with her new husband at his home in Poplar, east London (pictured), because she was too nervous

The Court of Appeal had ruled that the first trial was compromised when evidence of the defendant’s previous convictions – which include assault causing actual bodily harm, handling stolen goods, possession of cannabis and possession of crack cocaine – were revealed to the jury.

Mr Hearnden described chloroform as an ‘obsolete Victorian anaesthetic’ which is no longer used in any British hospitals, although it is still available and used as an industrial strength cleaner.

Forcing someone into marriage could be made a criminal act under possible changes to British law, David Cameron said yesterday.

Alongside moves aimed at cracking down on sham marriages used to cheat immigration rules, Mr Cameron said he has asked interior ministry officials to discuss creating a new offence aimed at those who force people to marry against their will.

Currently, a potential victim of forced marriage can apply to a court for a protection order, which is intended to stop intimidation or violence and prevent someone from being sent overseas.

Although anyone breaching the order can be jailed for two years, the sanction is made under civil – not criminal – law and is rarely imposed.

Only one person had been imprisoned under the legislation, which was introduced in 2008.

‘To force someone into marriage is completely wrong, and I strongly believe this is a problem we should not shy away from addressing.’

‘It is perfectly possible in the wrong hands, to use chloroform to commit crimes, and this fact had been known since at least 1861,’ he said.

The victim married her husband in a ‘simple Islamic ceremony at his flat in Poplar’ on 12 April 2009, the court heard.

‘She says she was forced to marry him, and it certainly seems that the period of time between the defendant first meeting her and the marriage ceremony was extremely short,’ said the prosecutor.

On the night of their marriage, the husband tried to have sex with his wife, but she refused, saying it was normal to wait two days before sleeping together.

When he tried again 48 hours later, she tried to put him off again with another excuse.

‘The defendant would not take no for an answer,’ said Mr Hearnden.

‘On at least two occasions between the day of the marriage ceremony and 9 May, the defendant had sexual intercourse with her without her consent.

‘The method, we say, was the same each time. He would tie her hands up with a scarf in the bedroom and he would make her senseless by putting some of the chloroform onto a towel, wetting it, and holding it against her mouth.

‘It would make her totally helpless during the rapes,’ he said. ‘She could feel pain and burning.’

The situation continued until 9 May, when a blazing row broke out at the marital home and the woman was badly beaten.

Police were called to the flat, at which point the woman took them to her bedroom and showed them the bottle of chloroform, which was large enough to hold around a litre of the drug.

She indicated what had been done to her in broken English and sign language, the court heard.

When her husband was questioned, he initially said they had never had sex and then said they had slept together but it was consensual.