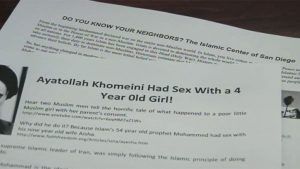 CLAIREMONT, CA (KGTV/CNN) – A religious organization in San Diego County has come under fire for passing out fliers near high schools that have a distinct anti-Muslim theme.

The two page flier is headlined “Ayatollah Khomeini Had Sex With a 4 Year Old Girl!” and blasts Islam for its beliefs.

Zac Patchett found the flier after his sister, a sophomore at Clairemont High School, took it home.

“I was just personally offended,” Patchett said. “It goes against being an American.”

But Gary Cass, a member of Defend Christians, the group behind the fliers, does not see anything wrong with the handout’s sharp tone.

“This isn’t racist at all,” Cass said. “All it’s doing is telling the truth about a group of people that are organized around a religious ideology. It transcends race.”

2 Replies to “Group defends anti-Islamic flier given near schools”