Muslim taxi drivers in New York have won a controversial battle to take down adverts for strip clubs from their roofs.

The religious drivers had challenged rules which prevented them from objecting to certain adverts being placed on their vehicles – even if they owned them.

But in a landmark ruling, the city’s Taxi & Limousine Commission finally agreed yesterday to allow them to decide to opt out of displaying ads which offend their beliefs. 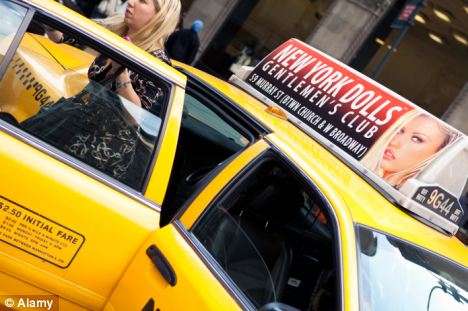 Mohamed Tahir, 66, drives a cab which displays an advert for the Flashdancers Gentlemen’s Club.

He told the New York Post: ‘We are Muslims, and we do not like the ads. If I had another ad, I’d change it right away. It bothers many of us.’

Under new rules, cab drivers who own their vehicles can themselves decide which ads to object to – whereas previously they had to display any images their bosses told them to.

‘I had to walk to mosque. People getting out of the mosque would see the disgusting things’

‘The law is now on our side!’ Osman Chowdhury, who is a taxi driver and leading member of the Bangladesh Society in Queens, added.

His cab used to display an advert for a strip joint and he was so ashamed of it he refused to drive it to religious services.

‘I had to walk to mosque,’ he told the Post. ‘People getting out of the mosque would see the disgusting things.’

In order to have the rules changed, a group of Muslim cab drivers told their industry’s board of commission of the shame they felt displaying the sexy ads.

They said the images had a negative affect at home, with one driver, Mohan Singh, telling the board that his six-year-old granddaughter had told him she wanted to become a dancer after seeing an advert for Flashdancers on his taxi.

‘We should keep [the advertisement] there to tell the children that it is good?’ he asked.

The board agreed yesterday to change the rules, prompting an outburst of applause from the Muslims at the meeting.

‘The most important thing is for the children,’ Mr Singh added after the ruling.