Multiculturalism of course means Islamic supremacism. How long till Canada does this? I bet we already have.

The first free school for Muslims in the country will open in Blackburn, Lancashire, next year.

The business case for Tauheedul Islam Boys’ School in Darwen has been approved by the Government.

But opponents have described the decision as ‘extremely bad news’ for community cohesion and claim it will deprive state schools of vital funds. 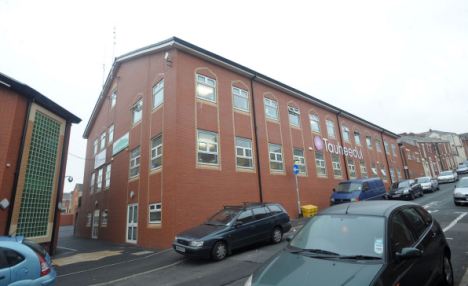 First: The Tauheedul Islam School (pictured) already has a girls’ school and has been approved by the Government for a new boys’ school

WHAT ARE FREE SCHOOLS ALL ABOUT?

Free schools are designed to allow new schools to be started. They are state-funded and should be non-selective.
While they are independent they are also accountable to Ofsted and national tests.
They can be established by various groups including charities, universities, businesses and parents.
They should improve choice and raise standards, but are not allowed to be biased.
They will be able to be started in shops and houses after Education Secretary Michael Gove confirmed he is to relax planning laws.

Simon Jones, national executive member for the National Union of Teachers, and Blackburn with Darwen representative, said: ‘It will further undermine much of the progress towards community cohesion. We are on our way to a completely segregated schooling system. It is going to develop potential social problems in the future.

This is extremely bad news for Blackburn with Darwen. It is not unexpected, nevertheless it is still a bad day.’

Councillor David Foster, leader of the Liberal Democrats, who is also a local methodist preacher, said: ‘In my view we shouldn’t have any religious schools of any faith. One of the problems in Blackburn is the segregation of communities.

‘A lot of schools are mono cultural and we need to try to develop ways in which we educate the community as one rather than separately.

‘I hope Tauheedul ensures that it provides a curriculum where pupils are a full part of the community and they continue to develop links with other schools as the girls’ school does.’

‘We are on our way to a completely segregated schooling system. It is going to develop potential social problems in the future’

Tauheedul Islam Girls’ School principal Mufti Hamid Patel, who made the application with governors, has vowed that the school will be a beacon to raise overall achievements in all schools in Blackburn with Darwen.

There is currently a Tauheedul Islam Girls’ School they want to open a new Boys’ school under the same name, but on a different site.

Mr Patel said he had developed a curriculum where the school would play an active role in all areas of the community and also had visions to enrol students into university at 16.

The detailed plan includes all students completing 500 hours of community service throughout their school life, specialisms in sport and the Big Society, outdoor pursuits such as canoeing and mountain climbing more than once a year and a finishing school. 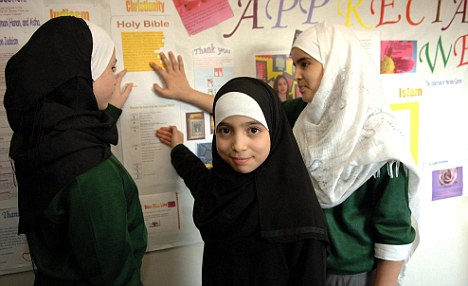 Balanced education: New free schools must admit 50 per cent of pupils without reference to their faith

Non-pupils will be able to study GCSE and A-level revision sessions in areas such as Darwen and Shadsworth. And a Sports’ Academy for primary school children will be created.

WHAT ARE FREE SCHOOLS?

There is not a ’one-size-fits-all’ approach. They are not defined by size or location: there is not a single type of Free School or a single reason for setting them up.

Free Schools could be primary or secondary schools. They could be located in traditional school buildings or appropriate community spaces such as office buildings or church halls.

They could be set up by a wide range of proposers – including charities, universities, businesses, educational groups, visionary teachers or committed parents – who want to make a difference to the educational landscape.

They might be needed because there simply are not enough school places in a local area and children have to travel too far to the nearest school.

Since the plan was first mooted around 700 pre-registration admission forms have been submitted by parents – including from London, Birmingham, Liverpool, Dewsbury and Bolton – for the first 150 places.

Free schools do not fall within local authority control and get their funding direct from the Government, but have greater freedom than academies to set their own agenda.

Mr Patel said: ‘This is a fantastic milestone. We are very excited and think it is good news. The support is generally good from across all the communities.

‘Though our intake will be comprehensive with learners from areas which are the most deprived in the country, our school will have an elite, but not elitist, philosophy.

‘It will be a ‘grammar’ school for ordinary kids. Every young person at Tauheedul Boys’ High School will have a sense of privilege and exclusivity.’ 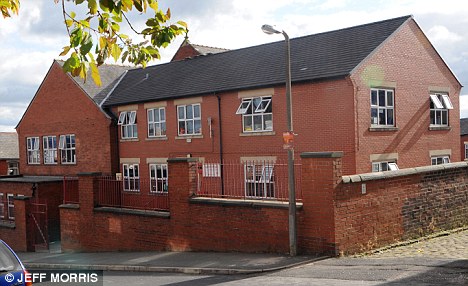 ‘Providing increased diversity’: The Tauheedul mosque is opening a free school, which already has a large number of Muslim pupils

Free Schools will be expected to have inclusive admission arrangements and while they don’t follow the national curriculum, they must provide a balanced education.

If it is oversubscribed then it must allow for 50 per cent of places to be allocated to children without reference to faith.

If a school is under-subscribed every child who has applied must be admitted, whether a faith or non faith applicant.

The school will open in September next year on the site of the girls’ school in Bicknell Street, Blackburn, after it moves to its new location in Beardwood Humanities College, Preston New Road, as part of the council’s Building Schools for the Future scheme.

It will have an admissions policy of 75 per year with year’s seven and eight starting in September. Only 50 per cent of the admissions will be allocated to members of the school’s affiliated mosques.

Mr Patel said: ‘We have interest from everywhere in Blackburn and outside Blackburn but we can’t do anything about those outside of Blackburn at this stage.

‘It also means that numbers are going to be limited and we have made a commitment to limit numbers as part of the process to not damage admissions to other schools in the borough.

‘All of our students will be told to aspire to achieve the highest of standards, aiming to enrol at Russell Group Universities, which include Oxford and Cambridge, and become the outstanding innovators, entrepreneurs, thinkers and leaders of their century.’

‘However, now that it has been given the go-ahead I would like the school to continue to work in partnership with other schools and the local authority.’