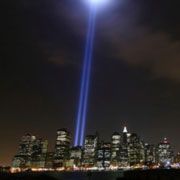 Something of a religious controversy had been brewing in the lead-up to the 911 commemorations. Former Deputy Mayor of New York Rudy Washington and some Christian groups were dismayed that Mayor Bloomberg had decided not to include clergy or prayers in the tenth anniversary ceremony. Christian clergy, they pointed out, had ministered to firefighters and police at Ground Zero in the aftermath of the attacks ten years ago.

“This is America, and to have a… continue reading!

4 Replies to “President Obama’s 9/11 address: “we preserved our values, and our character.””