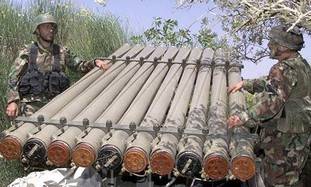 Noting an increase in the chance for a multi-front war, OC Home Front Command Maj.-Gen. Eyal Eisenberg revealed on Monday that Palestinian terror groups used a new and advanced rocket in their attacks against Israel during the recent round of fighting in the Gaza Strip.

“After the ‘Arab Spring’, we assess that a winter of radical Islam will arrive and as a result the possibility for a multi-front war has increased including the potential use of weapons of mass destruction,” Eisenberg said during a conference on the Home Front at the Institute for National Security Studies in Tel Aviv.

Eisenberg revealed that during the recent round of fighting between Israel and Palestinian terror groups in the Gaza Strip, a new weapon was fired into Israel. “We discovered a new weapon and as a result we instructed the public to take extra precautions and to seek cover under two roofs and not just one,” Eisenberg said.