Article by Gates of Vienna

Ayatollah Mohammad Taghi Mesbah-Yazdi is a religious advisor to President Mahmoud Ahmadinejad of Iran. His theological ideas have been influential in the formation of Iranian state policy.

The following article about Ayatollah Mesbah-Yazdi originally appeared on the Iranian dissident news site Rooz Online . Many thanks to Shabnam Assadollahi for the translation:

Mesbah-Yazdi: “No place for Human Rights, democracy or citizenship in Islam” 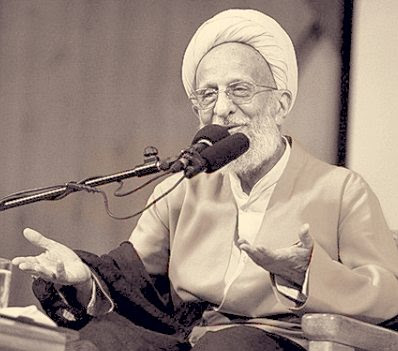 Mesbah-Yazdi, the theoretician of violence, gave a new speech at the end of Ramadan (end of August) in which he criticized the opinion of those people who claim Islam is based on generosity and respect for Human Rights.

In this speech he said: “Democracy, Human Rights and the rights of citizenship have no place in Islam.” He continued that there is no room for freedom of speech and thought in Islam, and that Islam is based on strictness and violence. Muslims and those who convert to the religion of Islam must only adhere to the opinions of the leader of the Islamic Republic, according to Mesbah. He continued: “Until a person has converted to Islam, he is free — but democracy and Human Rights have no meaning within Islam. Everything must be under the surveillance of the government, even the way people dress. And if some people say otherwise, they don’t know Islam.”

Mesbah-Yazdi founded the official ideological school for the politics of the regime with the unlimited budget approved by the government, which is supported by oil money. This ideology is, as mentioned by him, oppression and violence while paying no attention to the basic citizen and human rights. According to the expertise of knowledgeable scholars, Mesbah’s claims stand in contradiction to the teachings of the Quran that are based on the high value of each human being (KARAMAT).

The International Organization to preserve Human Rights in Iran strongly rejects such anti-religious and anti-human ideologies. It would be appropriate for the United Nations to demand that the government of Iran accept and provide a visa for Dr. Ahmad Shaheed, special rapporteur on international human rights, so that the minds of the people all around the world can comprehend the catastrophes taking place in the dark dungeons of the judiciary departments of Iran.

The International Organization to preserve Human Rights in Iran, 1. September 2011

2 Replies to ““Human Rights Have No Place in Islam””