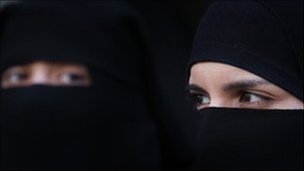 A law has come into force in Belgium banning women from wearing the full Islamic veil in public.

The country is the second European Union nation after France to enforce such a ban. Offenders face a fine of 137.5 euros (£121; $197) and up to seven days in jail.

Belgium’s law bans any clothing that obscures the identity of the wearer in places like parks and on the street.

It was passed almost unanimously by the lower house of parliament in April 2010.

MPs voted with only two abstentions to back the legislation on the grounds of security, to allow police to identify people.

Other MPs said that full face veils such as the burka or the niqab were a symbol of the oppression of women. 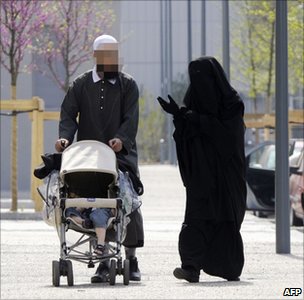 But critics of the law say it could end up excluding women, leaving those who do wear the full veil trapped in their homes.

And they say the measures are over the top – estimates suggest only a few dozen women wear this kind of veil in Belgium, out of a Muslim population of about half a million.

“We consider the law a disproportionate intrusion into fundamental rights such as the freedom of religion and expression,” Ines Wouters, the lawyer representing the two women challenging the ban, told the newspaper La Libre.

She has taken their case to Belgium’s constitutional court, where she will request a suspension of the law, AFP news agency reported.

2 Replies to “Belgian ban on full veils comes into force”