(This newspaper refers to several bombs, going off nearly at the same time)

Bomb attacks against government quarter. There are reports of major damage and several deaths. 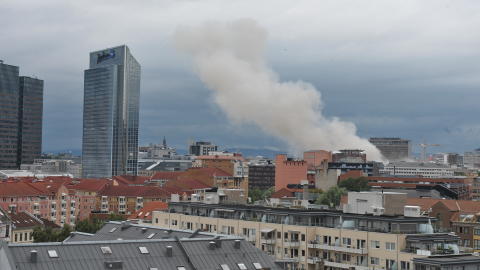 HUGE EXPLOSION:The level of injury is not known after the explosion in Oslo this morning. Photo: Trond Maroni(Dagbladet): There has been a huge explosion in the middle of its ministries in the city center. There is major damage, and several government buildings are razed. Several have been confirmed dead and many injured. The scope is so far unclear.

The 17-time police confirmed to Norwegian newspaper Dagbladet that the case of a bomb.- What we know is that there are many injured and some died, said police efforts leading to the scene, Thor Langli.

– People ran like crazy from the site, said an eyewitness told Dagbladet.

Police at the site told Dagbladet that the attack was directed against the Oil and Energy, as in 16-era still is on fire.

– An employee of the Ministry, who resided in the building that has the greatest damage, have tried to obtain an overview of the situation. He told Dagbladet that he believes there is about a car bomb on the ground in Grubbegaten.

– The building I was in, looks like after the Oklahoma bombing in the United States.

It is supported by the police informed that a big car to be driven up to the government building just before the explosion occurred.

The explosion could be felt in Holmlia, which is situated in Oslo’s southern edge, and the Nesodden and Sandvika, Akershus.

A father was called by her daughter, who was on Young Square, outside the Labour Party office.

– My daughter called me up and said she could not breathe, there was blood around her, and a piece of glass stuck in her throat, said Hoshang Afshar for her daughter Amosha of 16 years, now receiving treatment for injuries.

– There are a lot of injured people in the area, many seriously injured. There is injured inside the area with excessive bleeding. All the buildings are destroyed, it is absolutely awful, says Jan Larsen told newspaper Dagbladet.

Larsen works in the Health and Care Services, and sat at the computer when the explosion happened.

– It broke all the corridors. Everything was torn to shreds.

He believes there are those who stayed in the lower floors, which are the most injured.

– There may be more bombs, said police on site to Dagbladet.

The 17-time reject the police that they think it is about more bombs.

– There is nothing to suggest it, says efforts leading Langli.

The windows are blown out in a number of floors in the ministries, as well as buildings nearby.

– Windows on the VG-building’s facade to its ministries are blown out, and there are large amounts of glass and metal in the street, said Dagbladet reporter Harald Klungtveit, who is on site.

He was in the courthouse and heard a loud bang, and saw large amounts of dust that filled the street from the ministries. The level of injury is unclear, but several people will be injured.

– At least three people are injured, they get help from the public on site. The bleeding heavily from his head, he continued.

It is unclear what is going on inside the VG-house.Henrik Bull jobs in Grubbegaten, near the government quarter.

– I heard a tremendous explosion and thought that now I only get out as fast as I can, Bull says to Dagbladet.

The buildings in Market Street and Akersgata has received major damage.

– Windows on all Youngstorget is broken, and there are lots of ambulances outside. Fire alarm rings all the time in the National Theatre building, said Dagbladet reporter Line Brustad at 16 o’clock.

– All are chased away from the scene. There are many injured, and the stretchers and ambulances everywhere, says Dagbladet reporter Anne Marte Blindheim in the 16-time.

– There are lots of stores routes that are crushed by Yong Market and the main street. Police sealed off the area up at Aker Brygge, so there is no one who can get in, because they are afraid that there will be a bomb, says a police officer told Dagbladet.

Buses and trams will be stopped.

– None of the political leadership of Petroleum and Energy is damaged, says political advisor Ivar married.

Liberal leader Trine Skei Grande is currently traveling in New Jersey, but have had contact with party colleagues in Oslo.

– I have talked with my people, and they report that the party offices are completely destroyed. Fortunately, most had gone for the day, but one of our employees have been cuts. He’s been taken care of by medical personnel, says Grande to Dagbladet.

The head of the Home Guard Department HV02, which is responsible for counter-terrorism preparedness at the ministries and Parliament, awaiting mobilization orders.