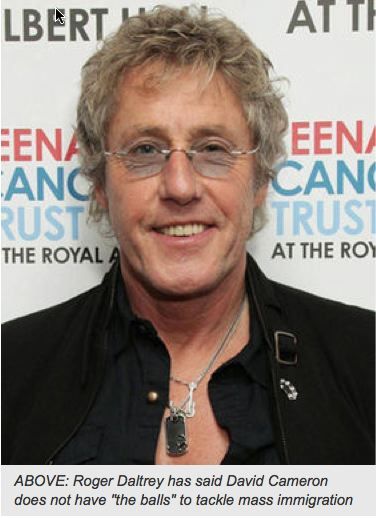 The Who’s working class hero Roger Daltrey sparked a storm a fortnight ago when he blasted Labour for “screwing” Brits by opening the floodgates to foreigners.

Yesterday he turned on the Tories, saying Mr Cameron and his team lacked the guts to deal with the issue.

He also took a pop at leftie rocker Bono for claiming he is a socialist while dodging taxes in his homeland.

Daltrey, 67, accused the Coalition Government of having their “heads up their a**e” when it comes to immigration.

He added: “They don’t realise how hard the average man has to work to pay those taxes.

“I don’t see anybody in the Government with a pair of balls. They’re so spineless.”

But bleak statistics reveal one in five Brit workers were born outside the UK.

He added: “Nobody is in charge and nobody wants to accept responsibility.”

Daltrey, now worth £32million, renewed his attack on the previous Labour Government for allowing immigrants to tear apart British communities.

The singer added: “They slaughtered the working class here. It is always the little man who is hurt.”

Daltrey slammed Bono as a “tax dodger” for shifting his group U2’s business base away from Ireland to the Netherlands.

He sneered: “I find it very interesting that people who spout socialism don’t want to pay for a socialist state.”