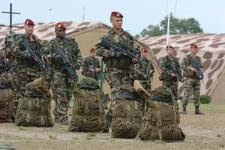 A French barracks in the city of Castres, department of Tarn, was attacked last Wednesday night by a gang of thirty thugs who may have been out for revenge against the French for their actions in certain Muslim countries. The article is from La Dépêche, a local paper, but it appears also at FNCV, a website devoted to military volunteers:

(…) Serious incidents occurred late Wednesday and early Thursday. Regarding these events that took place around 11:30 Wednesday night, the Eighth Parachute Regiment acknowledged officially that “something abnormal and of uncommon violence” was taking place. “A group of individuals tried to break through the boundary of the Fayolle quarter”, a spokesperson explained. “They apparently wanted to start fights with some of the soldiers.”

This group was composed of thirty individuals. In an agitated state, they went to avenue Jacques-Desplats and tried to penetrate into the courtyard of the regiment. They did not hesitate to use tear gas when they came upon the guard at the entry. The guard received reinforcements in short order, and the attackers were driven back. During the confrontation even a lead shot pistol was used. Traces of the impact were found on the surrounding wall.

Following this incident and other serious problems in the town, the officer on duty decided to send a truck out to pick up all the members of the regiment who were still on leave outside the barracks.

The article then describes the incidents that had taken place in the town in the hours preceding the attack on the barracks: