The New York Times has noticed. Interesting. The MSM is catching up to the blogosphere it seems. At least in terms of Egypt.Albeit to a limited degree. 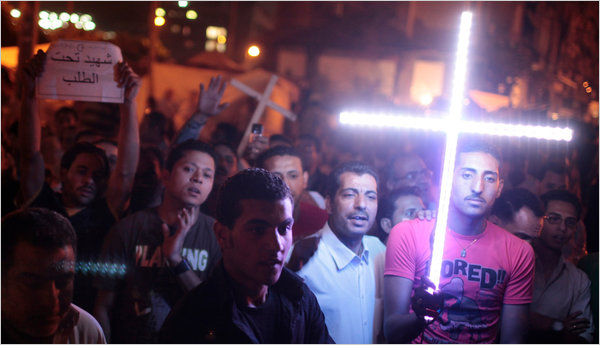 Ed Ou for The New York Times
Coptic Christians, many of whom have felt less secure since Egypt’s dictator stepped down, held a sit-in May 19 in Cairo.

CAIRO — The headline screamed from a venerable liberal newspaper: Coptic Christians had abducted a young Muslim and tattooed her with a cross. “Copts kidnap Raghada!”

Many Coptic Christians are concerned about persecution or the loss of rights under a predominantly Muslim government.

“They tied me up with ropes, beat me with shoes, shaved my hair,” Raghada Salem Abdel Fattah, 19, declared, “and forced me to read Christian psalms!”

Like many similar stories proliferating here since the revolution, Ms. Abdel Fattah’s kidnapping could not be confirmed. But for members of Egypt’s Coptic Christian minority, the sensational headline — from a respected publisher, no less — served to validate their fear that the Egyptian revolution had made their country less tolerant and more dangerous for religious minorities. The Arab Spring initially appeared to open a welcoming door to the dwindling number of Christian Arabs who, after years of feeling marginalized, eagerly joined the call for democracy and rule of law. But now many Christians here say they fear that the fall of the police state has allowed long-simmering tensions to explode, potentially threatening the character of Egypt, and the region.

“Will Christians have equal rights and full citizenship or not?” asked Sarkis Naoum, a Christian commentator in Beirut, Lebanon. A surge of sectarian violence in Cairo — 24 dead, more than 200 wounded and three churches in flames since President Hosni Mubarak’s downfall — has turned Christian-Muslim tensions into one of the gravest threats to the revolution’s stability. But it is also a pivotal test of Egypt’s tolerance, pluralism and the rule of law. The revolution has empowered the majority but also opened new questions about the protection of minority rights like freedom of religion or expression as Islamist groups step forward to lay out their agendas and test their political might.

Around the region, Christians are also closely watching events in Syria, where as in Egypt Christians and other minorities received the protection of a secular dictator, Bashar al-Assad, now facing his own popular uprising.

“The Copts are the crucial test case,” said Heba Morayef, a researcher with Human Rights Watch here, adding that facing off against “societal pressures” may in some ways be ever harder than criticizing a dictator. “It is the next big battle.”

But so far, there is little encouragement in the debate over how to address the sectarian strife. Instead of searching for common ground, all sides are pointing fingers of blame while almost no one is addressing the underlying reasons for the strife, including a legal framework that treats Muslims and Christians differently.

Christians, who make up about 10 percent of the 80 million Egyptians, say the revolution has plunged them into uncharted territory. Suppressed or marginalized for six decades here, Islamists entering politics have rushed to defend an article of the Egyptian Constitution that declares Egypt a Muslim country that derives its laws from Islam. Christians and liberals say privately they abhor the provision, which was first added as a populist gesture by President Anwar el-Sadat. But the article is so popular among Muslims — and the meaning so vague — that even many liberals and Christians entering politics are reluctant to speak out against it, asking at most for slight modifications.

“Our position is that it should stay, but a clause should be added so that in personal issues non-Muslims are subject to the rules of their own religion,” said Naguib Sawiris, a secular-minded Christian tycoon who has started his own liberal party.

He would prefer to remove religion from the laws entirely the way Western separation of church and state does, he said, but that idea could not prevail in Egypt. “Islam doesn’t separate them,” he said.

The most common sparks for sectarian violence, however, come from Egyptian laws dating from the end of the colonial era. One imposes stricter regulations on building churches than on mosques. Christians often look to get around the restrictions by constructing “community centers” with altars and steeples — sometimes provoking Muslim accusations of deceit and Christian charges of discrimination.

For page 2 of this NYT whitewash of the real situation please click here. I guess we should be thankful they noticed it at all.