From No Dogs or Anglophones

(h/t Miss Trixie with thanks)

Amir Khadir is the only member of the Quebec Parliament representing the separatist Quebec Solidaire political party, which is distinguished from the Parti Quebecois by being much more left wing, extreme and militant.

The flamboyant Khadir got himself elected in just about the only riding he could, Montreal’s Mercier riding which is arguably the most pro-sovereignist and militant riding in Quebec. 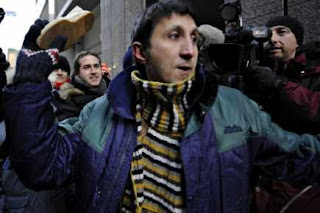 Since then, he has been working quite successfully to raise his profile and popularity by purporting to stand up to the ‘big guys’ and opposing just about anything the Quebec, Canadian or American government does or says.
Ever since he symbolically threw a shoe at a photo of President George Bush, at a rally in front of the U.S. consulate in Montreal, his popularity has skyrocketed. LINK

Recently he pulled off another coup by going to Toronto and posting part of the bail for Jaggi Singh, Canada’s most notorious anarchist, who was arrested at the G20 conference.

It was a masterful coup, based on perceptions that Quebeckers were targeted at the G20 protests by Toronto police because they were French. This narrative has been successfully sold as fact by Quebec militants and anarchists seeking to engender popular support.

Mr Khadir put forward the position that he provided Mr. Singh’s bail, not because he shares his ideals, but in order to defend democracy and the right to dissent. According to Khadir, it was also a gesture of solidarity with those Quebeckers who were targeted by Toronto police, another notion that went down well with the receptive Quebec audience.

But here’s the part Mr. Khadir left out..

It seems that  Mr. Singh and Amir Khadir are actually friends, a fact that Khadir wasn’t keen to emphasize.  In an interview after his release, Singh mentioned that he considered Kadir a friend and that he had previously gone to demonstrations with Mr. Khadir’s daughter.   LINK

By the way it isn’t the first time that Khadir posted bail for someone of  dubious distinction.  It is alleged that Khadir and his wife put up bail for Adil Charkaoui, accused by CSIS of being an islamist sleeper agent. Link

Please click to NDOE for the rest of this important piece

3 Replies to “Amir Khadir has a lot to hide.”