The article below was sent to me both by the author, and by Asaad Elepty, a Copt who I believe lives in Australia now although I could be wrong about that. Asaad is a dedicated bell ringer for the Christians in Egypt and sends me a lot of good information about truly horrifying events as well as some videos some Copts manage to take of slaughter and carnage perpetated upon them by the Egyptian authorities.

I trust that at some point, the decent people of the world will remember what ‘victim’ and ‘refugee’ really mean and help the Copts and other persecuted minorities in Islamic nations and purge the totalitarian elements out of our own nations, Islamic and otherwise.

The below article By Mary Abdelmassih of the AINA news agency is particularly disturbing. The thought of any individual or group of individuals “throwing a grandmother off a 2nd floor balcony” in the name of their Allah raises seriously concern about the entirety of the Islamic faith and the manner it may be interrupted and lived out.
Bear in mind this attack took place during the most sacred time of the christian calender.
Can you Imagine the Islamic reaction if the roles were reversed and such an attack took place during Ramadan?
Such actions are not only barbaric, they are void of any degree of decency or respect for humanity especially an elderly Lady. As the video clearly shows the Islamic vandals, thieves and arsonists are permitted to conduct the attack with no security police or law enforcement. The fire engine is prevented access despite repeatedly blowing its horn.
This is the Islamic treatment of Non Muslims, where is the peace and tolerance of Islam?
Field Marshall Tantawi, where is the justice and protection, SHAME ON YOU AND EGYPT.

I am at a total loss as to what the Islamic radicals have to do before western secular governments totally denounce the Barbarism of Islam.

Lord Jesus have Mercy upon us. 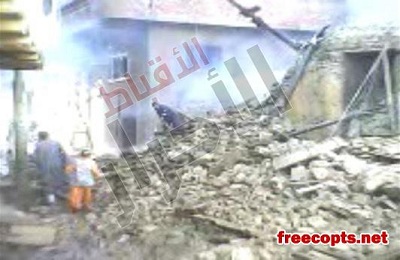 (AINA) — After the death of two Muslims on April 18 sectarian violence broke out in the southern Egyptian town of Abu Qurqas El Balad, in Minya Governorate, 260 KM south of Cairo. One Christian Copt was killed, an old woman was thrown out of her second floor balcony and ten Copts were hospitalized. Coptic homes, shops, businesses, fields and livestock were plundered and torche

Christians lived in terror, anticipating a blood bath on Friday, April 22 because Muslims as announced their intention to avenge the death of the two Muslims. Rumors spread throughout Abu Qurqas of many strangers and of trucks loaded with weapons coming into the village to carry out the threats during the Easter week. The terrorized Christian villagers sent pleas everywhere, asking for protection, even to Coptic groups in Europe and the U.S.

“Muslims threw my old mother out of the second floor balcony and torched my home,” said Adel Abdulllah to Hazem Refaat of Free Copts advocacy. His business and home were torched and his father and three brothers were arrested on suspicion of killing the two Muslims.

Copt Eid Roshdy, was stabbed during the violence and later died in hospital.

According to Bishop Makarious twenty Coptic families had their homes and businesses looted by Muslims then torched, and their livestock was stolen. “One shop was only 50 meters away from the police station,” he said. He also confirmed the story of the mother of Adel Abdullah who was thrown out of the second floor balcony.

Curfew was imposed in the village on Tuesday and Wednesday evening, from 7 PM until 6 AM to control the violence but various sources reported that looting and destruction of Coptic property continued after the curfew, even in the presence of the army and police.

According to the villagers a fight broke out on Monday, April 18 between the two Muslim families, Abdel-Kader and el-Gazzar which resulted in the death of two Muslims. Meanwhile an altercation took place in front of the villa of Coptic attorney Alaa Reda Roushdy between a minibus driver and passengers and the guards of the villa over a speed hump built in front of the residence, which the driver claimed was damaging busses. People congregated and the villa guards shot into the air to disperse the crowd. The Copts were accused of killing the two Muslims.

Bishop Makarious of Minya and Abu Qurqas said the first version of the story was the Muslims were killed during the fight between two Muslim families, then the story changed to accuse the Copts.

Ayad Shaban, a local villager told Al Karma TV the two Muslims were killed in the Eastern side of village where the majority of the Muslims live. “Then the story of the speed hump came and Muslims connected the two together and accused the Christians of the killing. There is no proof the Christians killed the Muslims.” He added that relationship between Muslims and Christians are usually good and believes whoever created this story came from outside the village and incited the Muslims.

In retaliation, Muslims attacked and looted two tourist coffee shops belonging to attorney Roushdy. One coffee shop was turned into a mosque called the “Martyrs” and the second one was destroyed.

Next day during the funeral of the Muslims hundreds of Muslims from neighboring villages joined and notes were distributed among them saying the Christians were the culprit. After burying the dead the Muslim mob shouted for revenge for their two “martyrs” and attacked Christian homes while shouting “Allahu Akbar.” (video shows Muslims looting Coptic property before torching it while chanting “Allahu Akbar.” Army soldiers are seen passing through the looters).

Father Rofail of the Saints Church in Abu Qorqas said “It was terrible, the people who were in the funeral left and started shooting in the air and throwing Molotov cocktails at homes and fields belonging to Copts; some homes were demolished. Anything belonging to Christians was destroyed.”

According to Coptic activist Nader Shoukry, fifteen Copts and eight Muslims have been detained for the murder of the two Muslims. No one has been detained for the attacks against the Copts. “None of the Muslims who looted and destroyed Coptic property was questioned,” said Bishop Makarious. He added it was a miracle that the Copts were not harmed when their homes were torched. “They had to jump over the roofs of the neighboring houses to escape the flames. In one instance a wall had to be broken between two houses to get the people out as they could not escape otherwise.” He criticized the police and the army for not bringing the situation under control. “We expected more from the police and army, but they were not impartial.”

The new Governor of Minya appeared on Egyptian Hayat TV and said the incidents in Abu Qurqas El Balad was not sectarian but a fight over a speed hump which escalated, and denied the loss of property.

Security forces prevented TV stations from filming inside the village and Muslims also attempted to prevent Christians from filming, but many video clips have been uploaded to youtube (video showing Coptic homes after looting).

Coptic attorney Dr. Ihab Ramzy called on Copts who have had their property damaged or lost to file a complaint with the police in order for him to represents them for compensation. He said they had to name the assailants in their report, but this may be not be possible because the victims were threatened by Muslims not to mention their names.

Attorney Roushdy was arrested by the military two days ago and accused of provoking riots which led to the death and injury of citizens. Today the military ordered him to be detained for 15 days pending investigations.