Something odd about this one. When they mention ‘spiritual note’ or, ‘he had spiritual leanings’ when referring to someone who has done something profoundly violent and antisocial, it always means Muslim. If it was any other faith they would name it while spilling champagne on each other. In any case, here is the story. Let’s hope someone manages to find out the facts. This story doesn’t mention the note but other ones have.

A gunman opened fire with an automatic weapon at a crowded shopping mall outside Amsterdam on Saturday, leaving at least seven people dead and wounding 15 others, with children among the victims, Dutch officials said.

The attacker was among the dead after fatally shooting himself at the Ridderhof mall in Alphen aan den Rijn, Mayor Bas Eenhoorn said. The suburb is less than 15 miles southwest of Amsterdam.

Three of the wounded were in critical condition, five were in serious condition and at least two others were slightly wounded, Eenhoorn said. 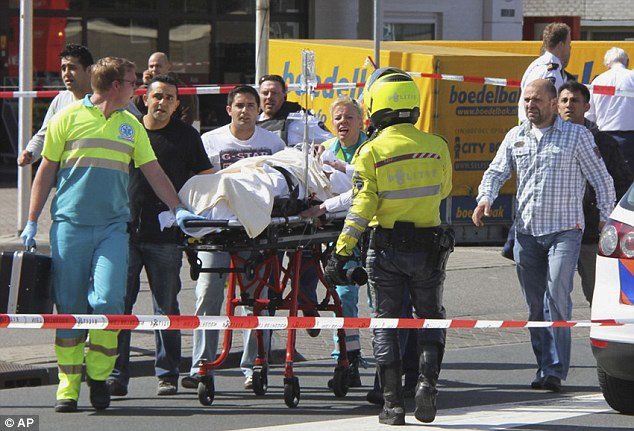 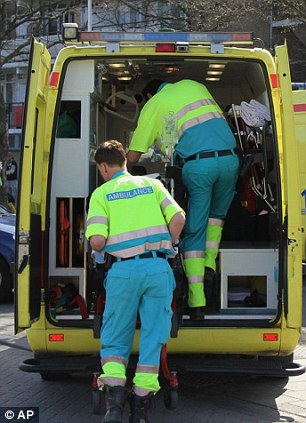 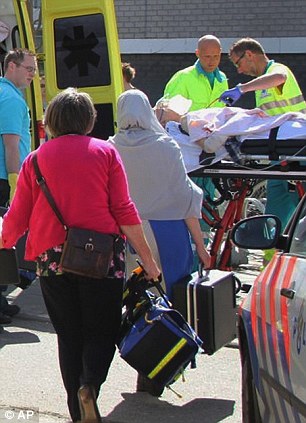 Maart Verbeek told state broadcaster NOS the attacker had a machine gun and appeared to be shooting at random.

‘There was a panic in the mall, a lot of people running,’ said Verbeek, a pet shop owner. ‘I see the attacker coming, walking, and I go inside the store … and I see him going by with a big machine gun.’

The mall was cleared by police who placed a cordon around the area. Hours after the shooting, residents continued to walk past the mall, some of whom appeared to be in a daze. 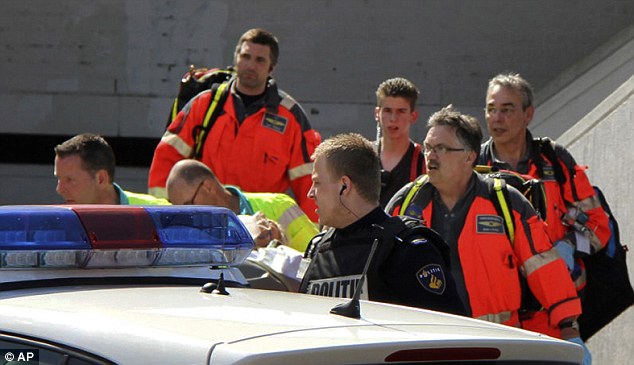 Panic: Shoppers and mall workers fled at the sound of the machine gun

Grim announcement: Acting mayor Bas Eenhoorn, centre, speaks to the media during a press conference in the town

‘You hear about this sort of thing happening at American schools and you think that’s a long way away,’ said Rob Kuipers, 50, a project manager. ‘Now it’s happened here in the Netherlands.’

Investigators were trying to determine the shooter’s identity, the mayor said. Witnesses said he had long blond hair, appeared to be about 25 years old, and wore a leather jacket with combat trousers. They said he sudden began firing with what appeared to be a machine gun . They said he then shot himself in the head with a second weapon, a pistol.

A resident who lives near the mall gave his name as Marijn said the shooting went on for several minutes. When he went to see whether friends working at the mall were OK, he saw the shooter lying dead in front of a grocery store. 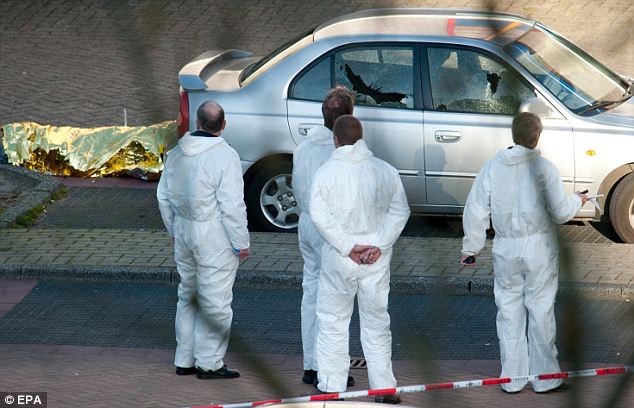 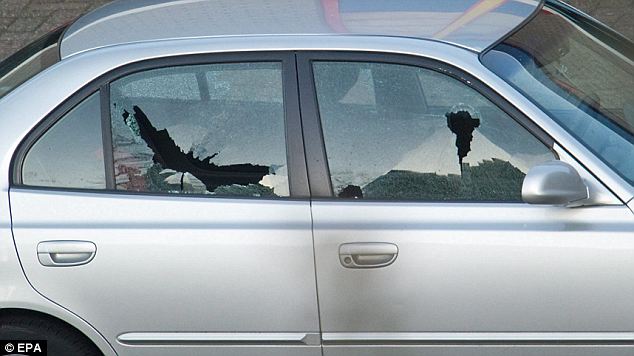 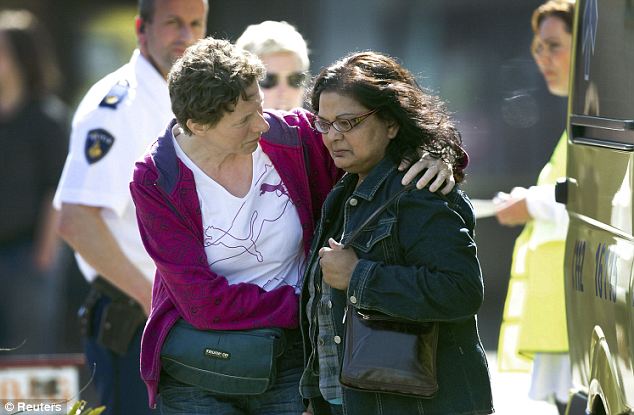 ‘There was glass everywhere,’ the resident said. ‘He was just shooting everywhere as if it were the Wild West.’ 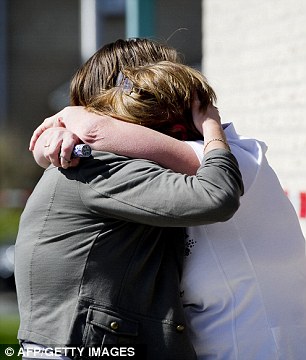 With his voice choking at times, Eenhoorn described the incident as a ‘disaster of unparalleled proportions’ for Alphen, known as a quiet suburb, and it was all the more shocking because it took place on one of the first sunny days of spring.

‘Under these circumstances, with many people shopping at the Ridderhof today, including parents with children, it’s an incomprehensible situation,’ he said.

Queen Beatrix and Dutch prime minister Mark Rutte expressed their shock and sympathised with the victims and their families.

The Foreign Office said there were no reports of any British casualties.

Although rare, shootings and violence are not unknown in the Netherlands.

Among other incidents, in 1999, four students and a teacher were hurt in a school shooting and in 2004, a teacher was shot dead by a student.

The country has also seen two assassinations in the past decade, the 2002 killing of right wing politician Pim Fortuyn by an animal rights activist and the 2004 murder of filmmaker Theo van Gogh by an Islamic extremist.

In 2009, a loner drove his car into a group of bystanders during a royal parade, killing eight and wounding 10.

Gun permits are difficult to obtain, but illegal automatic weapons and ammunition are frequently seized during drug busts. 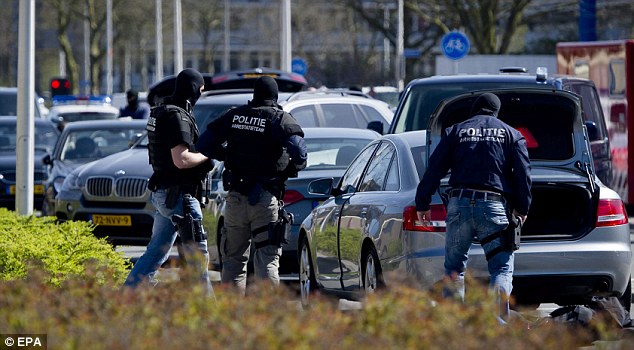 Armed police arrive at De Ridderhof mall in Alphen aan den Rijn, the Netherlands, after a gunman went on a rampage 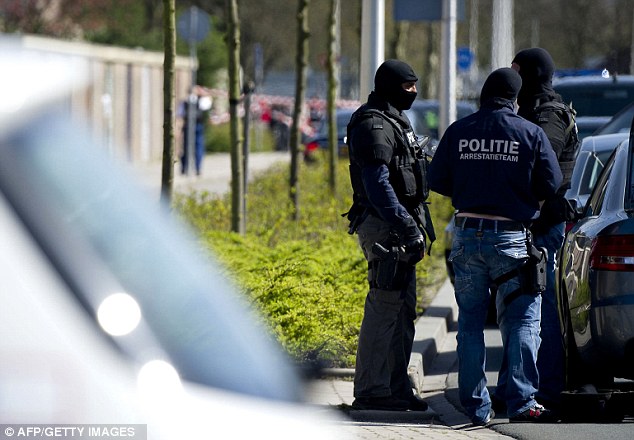