Swathed in Red Cross blankets, they were waiting for Silvio Berlusconi’s promises to come true as they huddled at midnight around a fire made from cardboard boxes.

Here in Lampedusa, a rocky island off the southern tip of Italy, the ten North Africans plan a new life in Europe — and believe the libidinous Italian Prime Minister will make it possible.

‘We pray for freedom,’ says Mohamed Fitouri, a 23-year-old builder from Benghazi, the rebel-held, second largest city in Libya, speaking in the firelight. ‘I cannot return to my country if it is ruled by Gaddafi. None of us can. Our future is in England or France. There is no turning back.’ 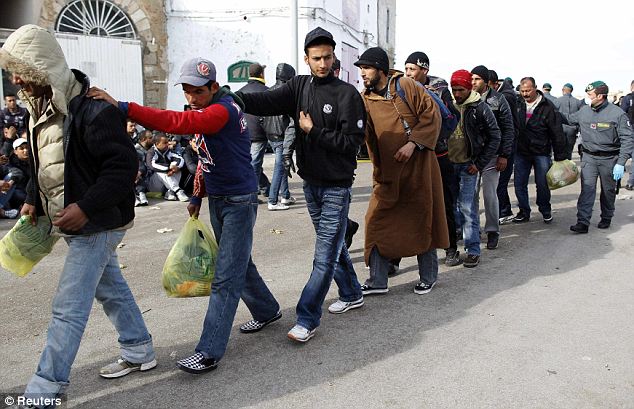 Seeking refuge: The Italian island of Lampedusa is at breaking point after the arrival of tens of thousands of refugees fleeing violence in north Africa

Last week Berlusconi made a whistlestop tour of Lampedusa, where 6,000 clandestini, or illegal immigrants, have arrived in rickety boats from North Africa — 70 miles away across the Mediterranean — in less than seven weeks. The island actually sits closer to the African coast than it does to Sicily, which makes it an obvious target.

Fleeing their turbulent homelands of Libya and Tunisia, they have doubled the population of this once picturesque holiday island. Today it has become a grotesque place, fouled by a toxic stench of human waste.

The narrow streets are thronged with men wearing a bizarre garb of tennis shoes and hoodies covered in blankets from the Red Cross which, fearing a health epidemic, set up a field hospital in a tent by the port two days ago. So many immigrants have been arriving that Italy has declared it a national emergency. 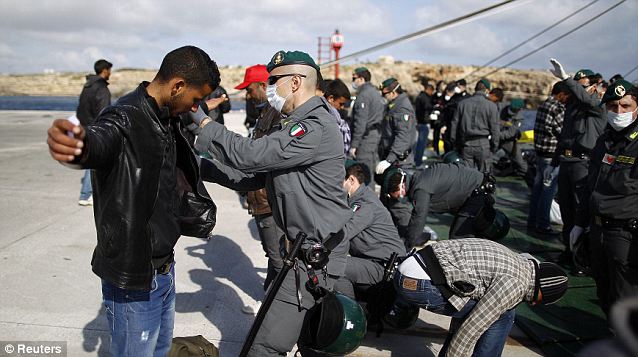 Immigration check: Italian Guardia di Finanza check north African refugees before they board a ship to holding centres on the mainland

By night, the unwelcome arrivals sleep in wooden fishing boats pulled on to the quayside for the winter, down narrow alleyways, or top-to-tail like sardines on the floor of the port’s harbour office.

On the hillside above the port, there are hundreds more, in makeshift shelters of plastic sheeting and corroding oil drums that litter the hillside. Down below, the once-clear waters are awash with plastic bags, banana skins and soiled paper, the debris of suffering humanity.

Despite a massive police presence, and attempts to move thousands off the island to holding camps in Italy, the situation is potentially explosive. With teenage girls being pestered by gangs of immigrants for sex, the presence of so many young men has also led to sporadic outbreaks of violence on the few streets here. 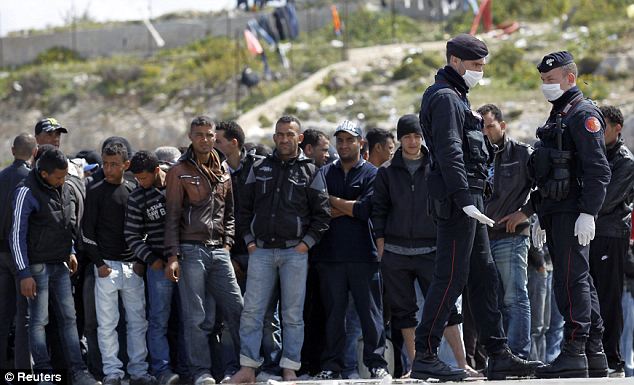 Drug use is also widespread. Some of the immigrants — among them escapees from Tunisian jails — have smuggled in narcotics along with large sums of cash to fund their journey farther north into Europe.

But drugs or not, these men are hated by the 2,000 families who live here, and Berlusconi knows it. On Wednesday he promised to free Lampedusa of all the illegal visitors in less than 60 hours with an airlift and a fleet of ships to take them to the mainland, where their claims for asylum will be processed.

After that, a minority will be sent home, though many will be allowed to stay and eventually claim naturalisation. Others will head to France and try to board lorries bound for England.

But bad weather and a stiff wind have blighted the Prime Minister’s plan for the moment at least, with an airlift to remove 800 cancelled at the last second because the huge Army troop carriers could not land.

I watched as these immigrants, mainly men in their 20s and 30s, were herded back on buses at the airport by riot police, drafted in from Sicily and wearing medical masks over their faces, to await another night at the island’s one overcrowded immigration centre. 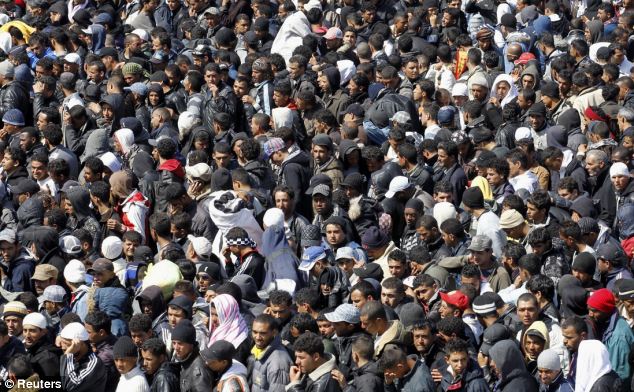 Throng: Since the beginning of this year some 18,000 refugees have arrived on Lampedusa. Over the same period last year the number was 27

Meanwhile, 1,700 were removed by sea on Thursday. But three ships waiting to carry away the same numbers again never made it into harbour because of stormy seas.

‘They have not come for us yet,’ says Fitouri angrily. After smuggling himself from Libya into Tunisia, he paid 2,500 euros — £2,200 — to people traffickers for a 23-hour boat trip from a North African beach.

‘I have been here ten days and, of course, I want to leave,’ he says. These immigrants know, as does Berlusconi, that what is happening here is the start of a diaspora that could change the face of Europe.

Mohamed Fitouri and the others realise that if they can get to mainland Europe now, they will have a chance of staying.

For it surely cannot be long before the gates shut on this huge exodus from North Africa. 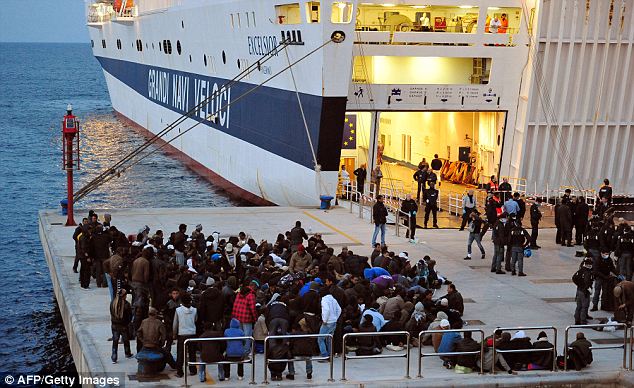 Transfer: North Africans wait to be transferred on to a cruise ship for transport to the mainland for processing

Since the beginning of this year, 18,000 migrants have arrived in Lampedusa. Over the same period last year it was 27.

The reason for the rise is simple. Alarmed by a constant trickle of illegals from Libya (including Somalians, Sudanese and Eritreans arriving there from the sub-Sahara and then paying Libyan traffickers for the boat journey) Berlusconi signed a ‘friendship’ agreement with the Gaddafi regime in 2008.

The controversial deal helped bring Gaddafi in from the cold. The dictator stemmed the tide of illegals to Lampedusa by  94 per cent. He sent his police on to the Tripoli beaches, arrested trafficking agents, and all but halted the trade.

Today, thanks to the Libyan conflict and the coalition air strikes, the agreement has been abandoned. And Gaddafi is threatening to wreak havoc by opening the floodgates again. He has promised to turn Europe ‘black’ unless his regime is left to stand.

‘There are millions of Africans waiting to get into Europe,’ the dictator said recently. ‘We don’t know what the reaction of the white and Christian Europeans will be when faced with this influx of people. Tomorrow, Europe may no longer be European.’

‘Tomorrow, Europe may no longer be European’

In the face of such threats, and to bolster his own flagging popularity,  Berlusconi has asked Italy’s regional governors, a reluctant Britain, and a wary France to take a proportion of the unwanted host of migrants.

Foreign Minister Franco Frattini declared: ‘The migrants must be repatriated or distributed around other European countries. There has been a flagrant lack of solidarity from Italy’s European neighbours, who have failed to help, starting with France.’

So, what will become of the migrants? Already 3,000 of the 12,000 taken to the mainland from Lampedusa this year have escaped from camps where they were held.

Many connect with people smugglers and relatives to cross Europe’s borders, where passport checks are lax or have been abolished under European agreements.

The town of Ventimiglia on the Italian-French border is now awash with illegals trying to get into France. While some of the Tunisians want to stay in France, whose language they speak, others from Libya and poor sub-Saharan nations are intent on getting up to Britain.

Were they to make it, they would be allowed to stay while their claims for political asylum were assessed, either in a detention centre or local authority housing, and then remain indefinitely — receiving benefits and housing — if successful. 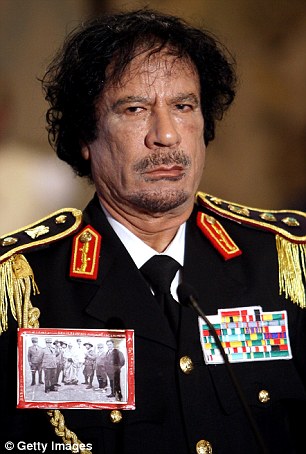 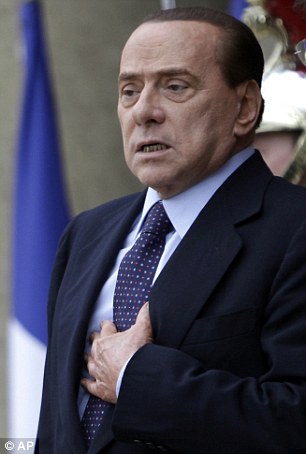 One migrant, 21-year-old Yassine, sat on the harbour wall with his eight-strong gang asking questions about the benefits system in Britain: Was it true, he said, that they would be given money and a place to live even if they do not work?

In fact, they already knew the answers and were seeking confirmation of what they learned from friends in Britain and the internet.

Many of the men came here in craft no bigger than a dinghy. At least 36 have drowned in recent weeks, though local fishermen claim hundreds have perished and the true scale of the crisis remains hidden.

Laura Boldrini, a UN spokeswoman, has warned that those who have arrived in Lampedusa may be only a precursor for 50,000 Libyans who will flee the conflict in their country. And the chaos in Tunisia, Egypt and Libya has led EU officials to predict one million desperate souls will soon be on the move from North Africa. Could so many really follow?

The answer may lie in what Manie Fayal tells me as he lies pinioned between other Tunisians in the port office. There must be 200 here, covered in blankets handed out by the Red Cross three days ago when they sent staff to the island to coincide with Berlusconi’s fleeting tour.

‘We are sleeping here like dogs, but we can wait and wait’

The smell of sweat is overpowering and the men apologise, pinching their fingers on their noses, as Manie starts his story.

To light his face, those beside him flash their cigarette lighters or use the torches on their mobile phones.

Manie is 27, and until February ran exercise classes at a hotel in Hammamet, a Tunisian beach resort popular with Britons. He has friends in England, his ex-wife lives in London and, because of his good English, he would like to live there.

He explains: ‘We got rid of the president who stole our money and gold and were pleased. But nothing has changed for us. Of course, we want to get to Europe because we know it will be good to us.

‘It is a big continent. It has room for all of us, whether from Tunisia or Libya. We are sleeping here like dogs. But we can wait and wait.’

These hordes in Lampedusa know that not all of them can be turned away. And in tea houses on the dusty, hot streets of the troubled and divided nations of North Africa, they know that, too.

And, willing to take a chance, they will soon be on their way.

9 Replies to “Special dispatch: Gaddafi’s diaspora and the Libyans overwhelming an Italian island who are threatening to come here”