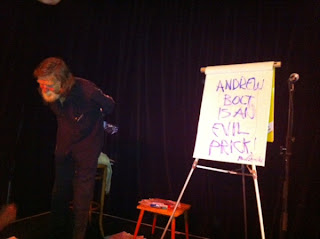 One of my favourite plays/movies is The Crucible, by Arthur Miller. I never studied it in school, so I never got to pull it apart scene by scene, line by line, and therefore learned to love it just as it is.

One thing that I did pick up along the way regarding this play is that it’s supposed to be an allegory for McCarthyism and the rooting out of communists in America in the 1950s.

The fact that McCarthy was right is often overlooked or ignored, so “McCarthyist” tends to be seen as a derogatory term.

Now, here in Melbournistan, we have our very own witchhunt going on with columnist/journalist Andrew Bolt’s head being in the noose.

Well, according to the Racial Hatred Act, (yes, we actually have one of those.Who knew??) several of Bolt’s columns back in 2009 offended a few people.

18C.(1) It is unlawful for a person to do an act, otherwise than in private,
if:
(a) the act is reasonably likely, in all the circumstances, to offend,
insult, humiliate or intimidate another person or a group of people;
and

(b) the act is done because of the race, colour or national or ethnic
origin of the other person or of some or all of the people in the
group. Note: Subsection (1) makes certain acts unlawful. Section 22
allows people to make complaints to the Human Rights and Equal
Opportunity Commission about unlawful acts. However, an unlawful act
is not necessarily a criminal offence. Section 26 says that this Act
does not make it an offence to do an act that is unlawful because of
this Part, unless Part IV expressly says that the act is an offence.

(a) causes words, sounds, images or writing to be communicated to the
public; or

(c) is done in the sight or hearing of people who are in a public place.

They never seem to be applied equally; Christians and Andrew Bolt seem to be the main targets, but that is no surprise living in our current climate of unease.

As Zenster* likes to say: there are a lot of skinless people living in our sandpaper world.

Which leads us to this week, where Andrew Bolt is on trial for effectively hurting people’s feelings. As a layperson, with all the necessary lack of credentials in law, that’s how I see it.

We do have a remarkable number of committees, statutory bodies and grants available for people of aboriginal descent, to the extent that it does sometimes feel (as a white person), that there is a separate civilisation living alongside mine.

There is even a section of the Magistrates’ Court that is available only to those seen to be of aboriginal descent.

With all of this opportunity, and positive discrimination in favour of a small percentage of the population who have a different culture to the majority (2.5% of the pop at last census), you’d think that the last thing to worry about would be people getting upset by a few columns written by someone who’s known to stir the possum with his opinions.

Let’s face it, Andrew Bolt has upset plenty of people over the years, up to and including magistrates, so it’s not like anyone would be surprised if his opinions are not universally welcomed.

It’s interesting that so many people think that Bolt is so evil and racist.

It’s also interesting that the prosecuting QC in this court case was able to suggest that Bolt’s opinions are akin to the eugenics movement which led to the development of the Nazi Final Solution.

I guess the idea of “free speech” is rather amorphous, when QCs can play the nazi card with no apparent fall out, but questioning culture is a rather large and legally tricky minefield.

As Ron Merkel says, there’s an “us and them” mentality, but only one side appears to be allowed to have it.

Then again, as Michael Connor notes:

Mr Merkel also said, “This case is not about free speech.”

*Zenster is a regular commenter at the Gates of Vienna blog.

3 Replies to “The New Puritans Have Bolted.”