From The Westminster Journal 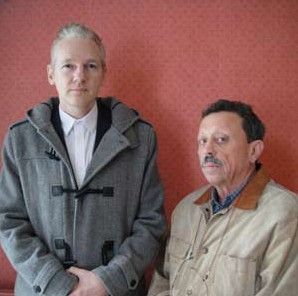 Last week WikiLeaks’ former “no. 2” Daniel Domscheit-Berg said that Julian Assange, the organization’s chairman, “sought out” Israel Shamir for collaboration. Shamir, A Russian Jew who converted to Christianity, is best known as an anti-Semitic/anti-Zionist conspiracy theorist, and author of numerous articles and several books in this genre. According to Domscheit-Berg, Assange had read Shamir’s works and found them “compelling.”

A statement on Shamir’s website claimed that he “is NOR [sic] a member, NEITHER an employee of Wikileaks: he is a freelance writer covering the Cablegate for the Russian media.” Cablegate, a play on the so-called “Irangate” scandal, refers to the leaking, and the subsequent Wikileaks’ publishing, of tens of thousands of classified US diplomatic cables.

In the abstract, Shamir seems a highly unlikely figure to seek out for collaboration on such a project. An anti-Zionist conference, held by MAUP in the Ukraine, was attended by Shamir, former KKK leader David Duke, and others in this field of study. Hardly surprising, Shamir is highly praised by David Duke, although he also has friends on the far-Left of the political spectrum, most notably… Read More.

4 Replies to “Wikileaks, the Conspiracy Theorist, and the new anti-Semitic Myth of World Power”