The narrative that the left wing is against racism but just hates Jews seems to be gaining steam and becoming less subtle these days. This video is right out of the Nazi era.

Please click over to this site for more information on this march. I will dig into it more and see if anyone can identify the flags being flown and so on.

Thanks Dan for the heads up.

I asked my friend and fellow Vlad contributor, A Milar to help me identify some of the symbols this crowd is carrying.

Here is what he gave me so far:

Here is a better image from a different event: 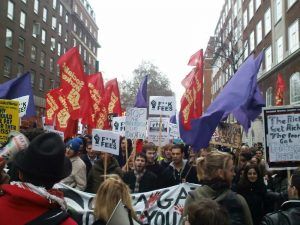 Unite Against Fascism is a Socialist Workers Party front group. Interesting that they would march while anti-Semitic statements were being used to whip up the crowd — sounds like an SWP speaker too.

Thanks A. Milar for the help.

12 Replies to “Mask comes off of the Euro-left”