It is an assembly hall of the sort found in any ordinary school. Boys aged 11 and upwards sit cross-legged on the floor in straight rows. They face the front of the room and listen carefully. But this is no ordinary assembly. Holding the children’s attention is a man in Islamic dress wearing a skullcap and stroking his long dark beard as he talks.

‘You’re not like the non-Muslims out there,’ the teacher says, gesturing towards the window. ‘All that evil you see in the streets, people not wearing the hijab properly, people smoking . . . you should hate it, you should hate walking down that street.’
He refers to the ‘non-Muslims’ as the ‘Kuffar’, an often derogatory term that means disbeliever or infidel.

Welcome to one of Britain’s most influential Islamic faith schools, one of at least 2,000 such schools in Britain, some full-time, others part-time. They represent a growing, parallel education system. 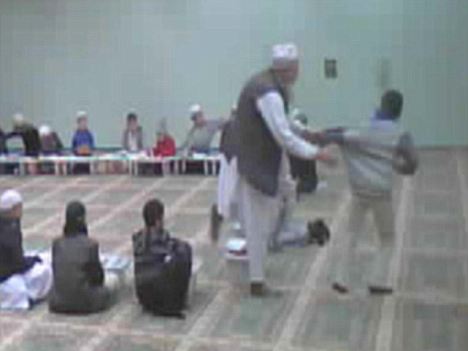 Grabbed: Secretly filmed footage from the Markazi Jamia mosque shows a teacher pulling a pupil towards him and striking him on the back

The school is the Darul Uloom Islamic High School in Birmingham, an oversubscribed independent secondary school. Darul Ulooms are world-renowned Islamic institutions and their aim is to produce the next generation of Muslim leaders. In fact, these schools have been described as the ‘Etons of Islam’.

This school is required by its inspectors to teach tolerance and respect for other faiths. But the Channel 4 current affairs programme Dispatches filmed secretly inside it – and instead discovered that Muslim children are being taught religious apartheid and social segregation. 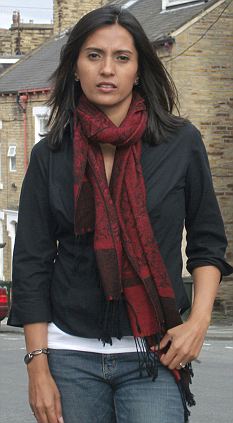 We recorded a number of speakers giving deeply disturbing talks about Jews, Christians and atheists.

We found children as young as 11 learning that Hindus have ‘no intellect’ and that they ‘drink cow p***’.

And we came across pupils being told that the ‘disbelievers’ are ‘the worst creatures’ and that Muslims who adopt supposedly non-Muslim ways, such as shaving, dancing, listening to music and – in the case of women – removing their headscarves, would be tortured with a forked iron rod in the afterlife.

In 2009 this school was praised by Government-approved inspection teams for its interfaith teachings. The report said that ‘pupils learn about the beliefs and practices of other faiths and are taught to show respect to other world religions’.

It seems that the inspectors were unaware of the teaching methods revealed by our undercover reporter, Osman. He was taken on as a volunteer at the Darul Uloom school in Birmingham in April 2009 and was allowed to sit in on some lessons – but not their Islamic classes.

So, in July last year, he went into one of the rooms where we’d heard they taught Islamic studies and left a secret camera to record the lessons.

Filming intermittently over a period of four months, the camera recorded children being taught a hardline, intolerant and highly anti-social version of Islam.

During the same period our reporter also attended the Markazi Jamia mosque in Keighley, West Yorkshire, after hearing of serious allegations that children were being hit at its madrassa. 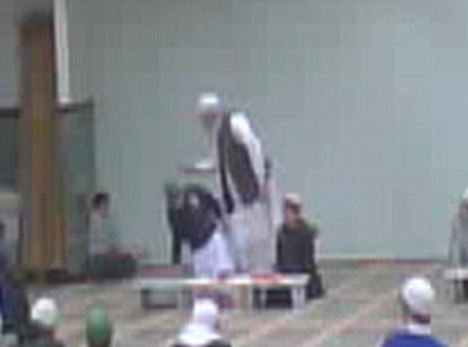 Slapped: A child receives a sharp blow on the back of the head from the same teacher. The impact of the blow can be heard on the film

Madrassas in the UK are part-time after-school or weekend classes, often held in mosques, where children are taught to read the Koran. In Keighley it is not what they are being taught that is the problem, but how.

Again, Osman went into the mosque and left the camera in the room where classes took place.

The film shows children as young as six sitting on the floor of a large room in the mosque, one of the biggest in the country. The boys are hunched over wooden benches, rocking backwards and forwards as they rote-learn the Koran in Arabic. A man with a long white beard dressed in a traditional shalwar kameez – tunic and trousers – sits at the head of the class.

‘He slaps one boy, strikes another and kicks a third’

Periodically he gets up and walks behind the boys. As he passes, the children appear to cower and watch him nervously. It soon becomes clear why.

He unexpectedly raises his hand and slaps a young boy hard on the head. Moments later he strikes another. And then he kicks a third child.

In just two days of filming in December 2010, the camera recorded the teacher hitting children as young as six or seven at least ten times, in less than three hours of lessons.

From what we could see, every ¬single blow was pretty much unprovoked. We soon realised that the beatings were routine. The behaviour of the boys, the way they flinched and backed away when he approached, indicated that they were long-accustomed to being hit and kicked as they studied.

In another incident an older boy, left in charge of a class while a teacher is out at prayer, picks up a bench and threatens to hit a younger boy with it. 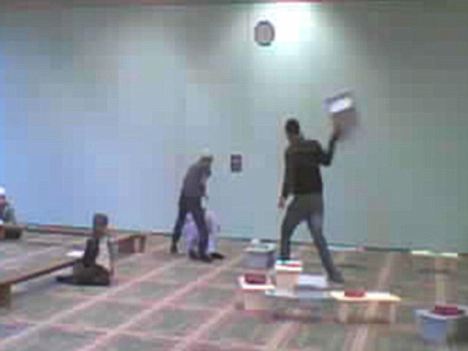 Threatened: An older pupil holds down a boy while another pupil – put in charge during the teacher’s absence – aims a bench at him

During the making of this Dispatches film I have often counted my blessings. I received my Islamic education at home. My mum would read the Koran with me and most of my knowledge of Islam came from within the family. Others have not been so lucky.

Osman was subjected to beatings at four separate madrassas in the East Midlands as a child. He says that for the nine years he spent going to after-school Koran classes, he was hit regularly, at least a couple of timesa week.

‘It destroyed my confidence,’ he says, ‘and the worst bit was never knowing when it was going to happen. I had a horrible teacher who would use his fists, a stick, a shoe, anything he could find. He’d just get angry and lash out.’

Osman’s young cousins go to the same madrassas he attended and told him the beatings were still continuing. This persuaded Osman to try to reveal the truth behind the private world of faith schools. Over a period of two years he bravely placed cameras in both schools and collected highly sensitive material for us. His experience of madrassas is not uncommon. But persuading people to go on camera about this has been difficult. One family who were willing to talk were too frightened to do so openly.

‘The law must change to protect these children.’

‘Salma’ and ‘Ayesha’ are a mother and daughter whose identities we are protecting. Ayesha is now sitting her A-levels but when she was seven she was beaten at her Koran classes. She says: ‘The teacher would sit there, tell me what to read, pronounce it to me – then if I said it wrong he would hit me on the hands with a ruler.’

Her younger brother, only five at the time, would be hit on his feet with a stick. They dreaded going to those classes but did not tell their mother. Salma eventually withdrew her children from attending madrassas for a completely different reason: she learned that they were being taught an intolerant version of Islam. ‘They were using terms like “Kaffir” just because somebody isn’t of the same religion,’ she says, ‘and I’m teaching my children to integrate and not be racist so I pulled my children out.’

Academic and theologian Dr Taj Hargey invited me to visit his part-time Islamic school in Oxford where children are taught in mixed-gender classes.

Here I witnessed a modern and refreshing method of teaching. Pupils were told to respect other faiths, ask questions about their religion and recite from the Koran in English as well as Arabic.

Dr Hargey told me he set up this school because of claims that Muslim parents had made to him about beatings in other madrassas. ‘It’s an outdated, archaic concept,’ he says, ‘and if we inflict this violence we will sow the seeds of violence in them.’ 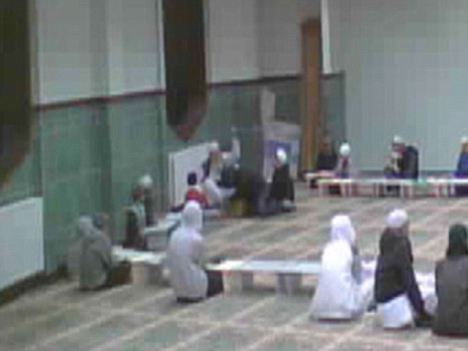 Punished: One of the madrassa students is grabbed by the wrist, pulled towards the teacher in charge of the class and struck on the back

Sir Roger Singleton, former Government chief adviser on the safety of children, and Ann Cryer, former MP for Keighley, want the law to change to ban physical punishment in supplementary classes, as it does in full-time schools. ‘It just isn’t acceptable,’ says Cryer. ‘We wouldn’t allow this to happen to white kids going to Sunday schools.’

We approached the Darul Uloom Islamic High School in Birmingham with the findings of our film. It claimed that the senior student who gave the speech about Hindus was later reported by other students, and has been expelled, and that no teachers were present ‘during the incident’.

The school said that a speaker who made comments about Jews was ‘visiting’ and his views did not represent school policy. It denied that its religious instruction was hardline or extremist and said it did not tolerate hatred towards any faith group.

In a statement, the school said: ‘Our ethos is for students to be full and active participants of British society.’ It also said that it would study our evidence and take ‘disciplinary measures’ if required.

Regarding the Keighley madrassa, we were told that the Jamia Mosque committee was firm in its resolve to take whatever action was necessary to protect children being taught at the mosque and that it would give its full co-operation to any enquiries resulting from our film.

If the law on physical punishment does change, that would be one way to protect the very young that attend these classes. But these part-time and full-time Muslim schools also need closer scrutiny – the regulatory system needs to be tightened up.

However, we have a Government that, on the one hand, gives grand speeches about tackling the causes of extremism, as David Cameron did last week, while, on the other, encouraging local communities to set up their own schools – including faith schools. It’s time to stop these mixed messages.

And Muslims can no longer sweep this under the carpet – they need to face up to what is happening behind closed doors. Many warn that if we don’t all tackle this toxic mix of hatred and violence head on, we will reap the whirlwind in years to come.
Read more: http://www.dailymail.co.uk/news/article-1356361/Hidden-camera-shows-beatings-religious-segregation-inside-Muslim-faith-schools.html#ixzz1DnDl6zAE

4 Replies to “Sneak preview: Dispatches: Lessons In Hatred And Violence is on Channel 4 tomorrow at 8pm.”