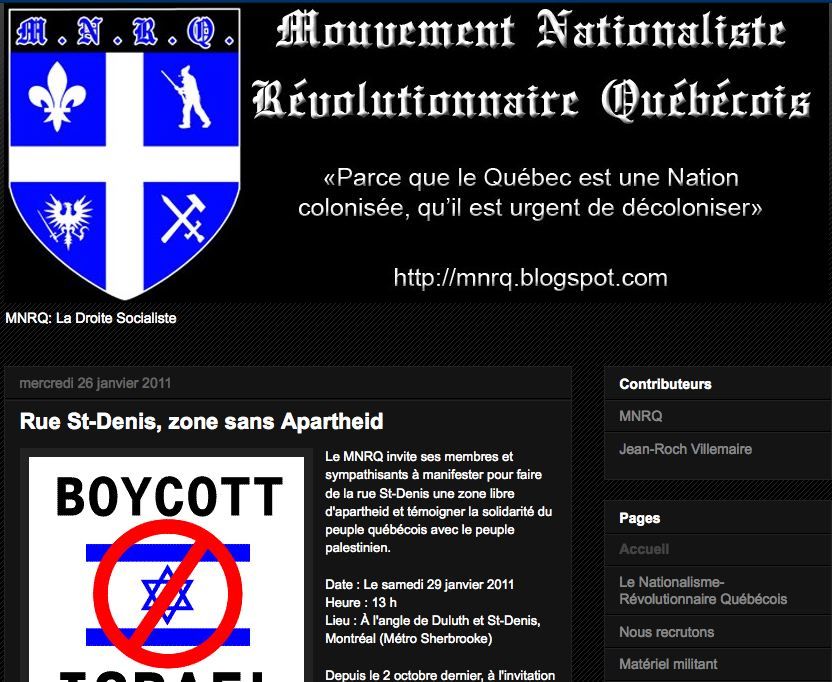 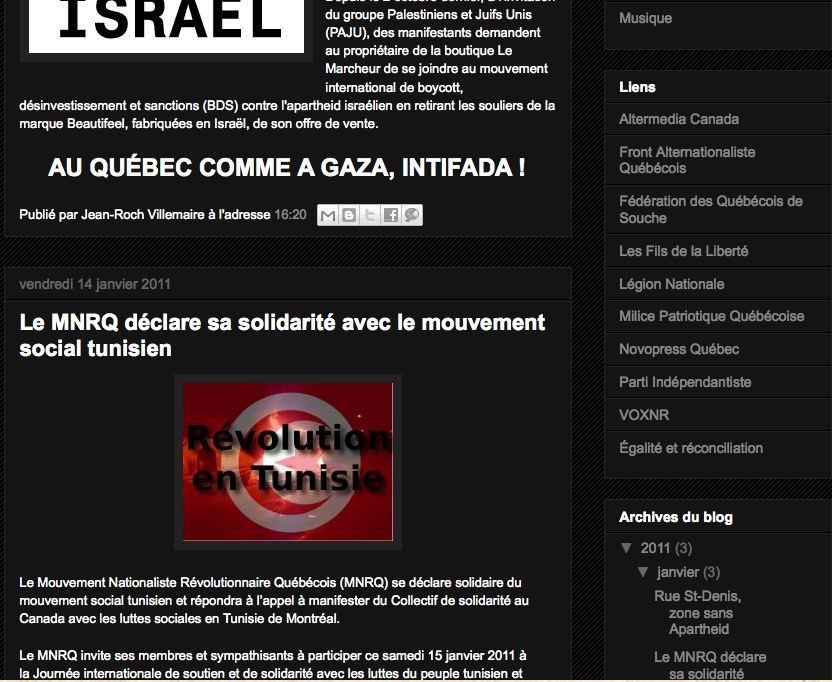 Above is a couple of screen captures of the website, www.mnrq.blogspot.com where the MNRQ stands for ‘Revolutionary Nationalist movement of Quebec’. They seem to feel that the national zeitgeist of Quebec is one of Palestinians and Quebecers if we read that web page correctly.

I would welcome any guesses as to what the symbols at the top in their coat of arms might mean or refer to. Interesting shapes and images for sure.

(No longer any need. Read down. The symbols and meanings have been found.)

The page starts with the assertion that St. Denis St. is a ‘non-apartheid’ zone. It then goes on to invite its members and sympathizers to protest to make St. Denis ‘free of apartheid and to witness the togetherness of the ‘Quebec population and the Palestinian population’, which of course, does beg the question, who are the Quebec population?

One might be concerned a bit over the choice of words. While it doesn’t quite say National Socialist, it seems to suggest that iconography with the word, Nationalist. Frankly I am a nationalist myself but add that to socialist and you have something quite different.

The page goes on to talk about picketing the shoe store in Montreal that sells the ‘Beauty-feel’- brand of Israeli made shoes.

Beyond the date and time and location, not much else there. I would be interested in peoples comments as to the symbolism and so on of this site however. Or if anyone knows anything more about this particular movement.

Eeyore for Vlad with special thanks to Bad-Faun for the tip and Bear for the patient translation.

Thanks to Bigcitylib who commented below, I was able to google search for the particular symbol I was curious about and found this:

This symbol described here does look suspiciously a lot like the one in the lower right of the crest of the Nationalist site of the people organizing the boycott of the shoe store. This would tend also to cast some doubt on the notion that this is merely political criticism of Israel and it’s policies and tend more to suspect that this is raw, old fashioned, knuckle-dragging Jew hate.

On the bottom left of the Quebec emblem is an eagle. A Millar found the following:

Here is an interview with the founder of the National Bolshevik Party called, ‘Each year I get closer to Islam’

Nationsal Bolshevism is a neo-fascist movement, drawing together aspects of the extreme Right and extreme Left (like National Socialism), and inspired by Hitler and Stalin.
http://en.wikipedia.org/wiki/National_Bolshevism