I will try and get this fully translated today. This is a story about how Muslims throw stones at Catholics in the heart of France during a mass. Try and imagine what would happen if Christians or Jews did this to Muslims at Mecca. Or even anywhere in the Western world. We, as a people, have become so suicidal we will not tolerate any act of self defence.

Please check back later today for a translation in full.

Thanks to Jano, from Bivouac

Reminds me of the words of Hans jansen at the Wilders trial :

« There are known examples of banging on the windows of non-Muslims in the neighborhood.
This cannot really be called criminal, but eventually the non-Muslims will move out.
Banging on windows and throwing of stones. This is being done primarily by brats,
but their parents approve of this behavior. This behavior is insufficient to take up arms against,
but is enough to make people move out. We would love it if we could find something outside of Islam which explains the behavior, but Islam approves it » 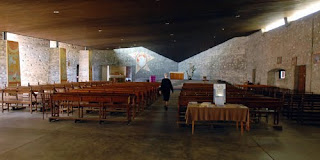 Sixty parishioners who attended a memorial service for the departed (All Souls’ Day) on Tuesday afternoon in a church in a ghetto neighborhood of Carcassonne, were the victims of two teenagers who, after entering the building, started throwing stones. One person was hit, and the status of the Virgin Mary, targeted by the two, was badly damaged.

Two parishioners who left the service to evict the two youth, unsuccessfully pursued them. They disappeared after insulting their pursuers.

A complaint was lodged by the police, which is taking the case very seriously. The desecration of the Saint-Jacques church and the stoning of the parishioners during a public service, is a first in this ghetto and caused a big stir in the Christian community.

The Crown prosecutor of Carcassonne Francis Battut has ordered an investigation to identify the teenagers “we take this very seriously” he said.

The facts date from Tuesday, but were not divulged until Thursday. “We ignore the motivation from these youths” said Abdallah Zekri who is representative of the French Council of the Muslim faith, and has condemned this as “a truant attitude”. The profanity of the Church St. Jacques and the stoning of the believers in the middle of mass, a first in a difficult neighbourhood, has triggered a great deal of emotion within the Christian community.

6 Replies to “Catholics stoned during mass in the heart of France.”