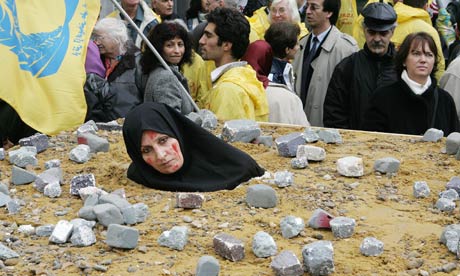 An Iranian woman at a protest in Brussels highlights the barbarity of death by stoning, in which women are buried up to their necks in front of a crowd of volunteers. Photograph: Thierry Roge/Reuters

Twelve Iranian women and three men are on death row awaiting execution by stoning despite an apparent last-minute reprieve for a mother of two who had been facing the horrific sentence after being convicted of adultery.

Human rights groups and activists welcomed a wave of international publicity and protests over the case of Sakineh Mohammadi Ashtiani, 43, who was awaiting execution in the western Iranian town of Tabriz after what her lawyer called an unjust trial and a sham conviction.

The Iranian embassy in London said in a statement that “according to information from the relevant judicial authorities” the stoning would not go ahead. If confirmed it would be an victory for a brief but intense campaign that was first highlighted by the Guardian last week.

However, there are still concerns over her plight. In a previous case a prisoner who was to be stoned was instead executed by hanging.

Speaking to this paper Mohammadi Ashtiani’s son Sajad, said his mother – whom he had spoken to by telephone – believed the pressure on her behalf might succeed, although he had not heard of any reprieve. “The campaign for her release is going very well,” he said. “They gave me permission to talk to her and she was very thankful to the people of the world for supporting her. I’m very happy that so many have joined me in protesting this injustice. It was the first time in years I heard any hope in my mother’s voice.”

Without a reprieve, Mohammadi Ashtiani would have been buried up to her neck before being pelted with stones large enough to cause pain but not so large as to kill her immediately. Iran routinely censors information about executions, but all the 12 other women on death row have been convicted on adultery charges, as has one of the three men.

Azar Bagheri, 19, was arrested when she was 15 after her husband accused her of seeing another man. She has been subjected to mock stonings along with partial burial in the ground.

Ashraf Kalhori, 40, also sentenced to death by stoning, was forced to confess to a relationship with her husband’s murderer, and has been in Tehran’s Evin prison for seven years, according to her lawyer.

In one especially gruesome case, Maryam Ayubi, another alleged adulteress, fainted while being ritually washed before her execution in 2001 and was stoned to death while strapped to a stretcher. Outrage over that led to the marking of 11 July as the annual international day against stoning – which will see demonstrations at the Iran embassy in London.

Iranian activists say the tragedy is that the families of those sentenced to death often ignore them. “It doesn’t matter to them whether the charge of adultery is true or not because the honour of the family is tainted so they forget the poor creature awaiting death,” said Soheila Vahdati, who is now based in California.

Shammameh Ghorbani, who is awaiting stoning, begged not to be freed from prison because she feared being killed by her family.

Shadi Sadr, an acclaimed Iranian lawyer, said it was hard to know exactly how many people were still facing stoning. Last year the Iranian parliament passed a law banning it, but the powerful Guardian Council has been silent on the issue.

“Many women are kept in prison because the government is very scared of the public attention,” Sadr said. “One of my clients has been there for eight years and her family have abandoned her.”

Publicity helps. “The only reason the Iranian government has not carried out stoning sentences on all these people is that it is afraid of Iranian public reaction and international attention,” said Sadr.

The embassy said in its statement: “This kind of punishment has rarely been implemented in Iran” and condemned media reports about the case as unreliable.

Mohammadi Ashtiani was convicted of having “illicit relationships” with two men. But her lawyer, Mohammad Mostafaie, insisted there was no evidence to justify an adultery conviction. As a member of Iran’s Azerbaijani minority, her inability to understand the language of the court also prevented a fair trial, he said.

William Hague, the foreign secretary, added his voice to the outrage today, condemning a “medieval punishment that has no place in the modern world”. He added: “The continued use of such a punishment in Iran demonstrates a blatant disregard for international human rights commitments … as well as the interests of its people. I call on Iran to put an immediate stay to the execution of Ms Mohammadi Ashtiani on the charge of adultery and review the process by which she was tried, and her sentence.

“She has already faced the disgraceful punishment of 99 lashes for adultery; her execution would disgust and appal the watching world.”

Actors Emma Thompson, Colin Firth and Juliette Binoche have backed the appeal to halt the stoning and playwright Sir David Hare. John Bercow, the Commons speaker, made a rare statement condemning a “horrific” matter and a “grotesque abuse” of human rights.

The International Covenant on Civil and Political Rights, to which Iran is a party, requires states that have not yet abolished the death penalty to restrict its use to the “most serious crimes”. The United Nations general assembly has called on all states to introduce a moratorium on the use of the death penalty.