Muslim doublespeak really is amazing. In this article from Australia, a set of Muslim families sue a water-park for telling them that their excessive dress was unhygienic for the various water activities, exactly as France has done and exactly for the same reasons, and of course the Muslims demanded money and a written appology claiming this was a victory for “Harmonious community relations”. Of course, harmony could never ever be Muslims obeying the damn rules when its in the interest of hygiene and proper health let alone the culture of the place they chose to move to. 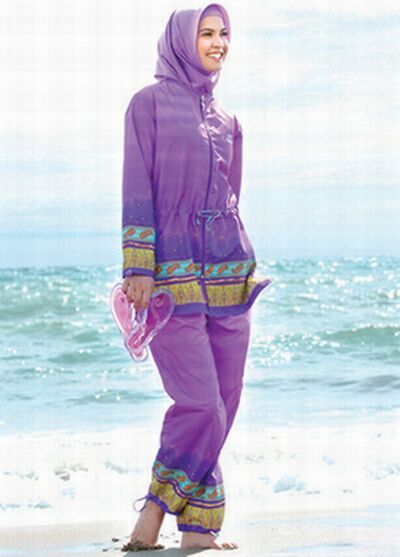 From Australian News at Google:

An Islamic woman has won $16,000 in compensation and a written apology after she and her friends were refused permission to go on water rides at Perth’s Adventure World because of their religious clothing.

Pakeeza Shaikh won the money this month following a year-long court battle after her group was told they could not go on water rides because of inappropriate swimwear.

Ms Shaikh complained in a private conciliation at the Equal Opportunity Commission that the group had suffered discrimination, and had been humiliated about covering up their bodies in line with their religious beliefs.

The parties could not comment yesterday because of a confidentiality agreement, but it is understood the money has been divided between the five Islamic families visiting the park as a group in February last year. It is understood they had rejected earlier offers of financial compensation until a written apology was included.

Ms Shaikh told _The West Australian _last year the women in the group were told they were not allowed on the water slides because their three-quarter length pants and their long shirts were inappropriate.

She said they were told if they were to enter the water, chlorine levels would have to be raised to counter the unhygienic effect from their clothes.

They were told their clothing could cause injury because it could get caught in the joints of the water slides. One woman in a head scarf was told to leave the baby pool.

The group had asked to see the rules that proved their swimwear did not meet the park’s standards. Management could not produce such a document and there were no signs to indicate the swimwear was inappropriate.

The Islamic Council of WA has applauded the result as a victory for common sense.

“We can never count victory in terms of dollars, but in terms of friendship and living harmoniously,” spokesman Rahim Ghauri said.

Adventure World general manager Grant Laidlaw said in February last year staff had made the decision after interpreting Health Department guidelines. He was satisfied they had complied with safety procedures.

The Equal Opportunity Commission said it could not comment on the case, but confirmed a recreation park had apologised to an Islamic group and paid $16,000 in compensation.

The commission said the recreation park had agreed to review its clothing guidelines, offered free entry passes to the group, and arranged a special welcome to restore the relationship with the families.

7 Replies to “Muslims idea of community harmony is to sue to get your way.”