A Catholic schoolgirl has been branded a ‘truant’ by her teachers after she refused to dress as a Muslim for a school field trip to a mosque.

Staff had ordered 14-year-old Amy Owen and her classmates to dress in headscarf, wear trousers or leggings and keep her arms covered for the compulsory visit to the mosque after it was arranged to promote ‘community cohesion.’

Parents at the 1,100 pupil Ellesmere Port Catholic High School in Ellesmere Port, Cheshire were also told they were each required to make a £3 contribution towards the trip for all Year Nine students. 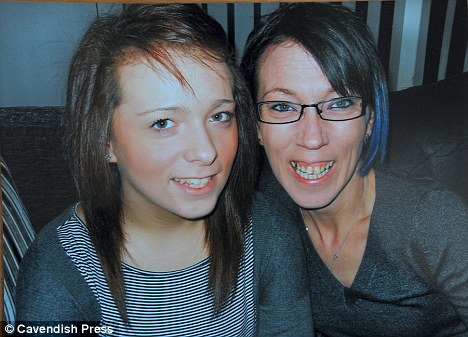 But when Amy refused to dress in Muslim attire for the visit to Al Rahma Mosque in Toxteth, Liverpool, staff warned her about rules and said refusal would mean non attendance which would then be marked down as an ‘unauthorised absence.’

In a stern letter to her family with words in block capitals and underlined, the school’s headmaster Peter Lee said the visit was ‘as compulsory as a geography field trip.’

He added: ‘There are two reasons for these visits. One is that the scheme of work in religious studies REQUIRES children to have knowledge and understanding of other world religions.

‘The second is that the school is REQUIRED to promote tolerance respect and understanding. This is known as community cohesion. A failure to do this could result in an unwelcome inspection judgement. None of us would relish that.

It is believed up to ten other families from Amy’s Year 9 classes also refused to dress as Muslims and were marked down in the truanting register.

But Amy’s mother Michelle Davies, 34, a home help said: ‘It’s like they’re putting a gun to your head – either you go to a mosque, or you’re marked down as an unauthorised absence on your record – that’s it no two ways about it. 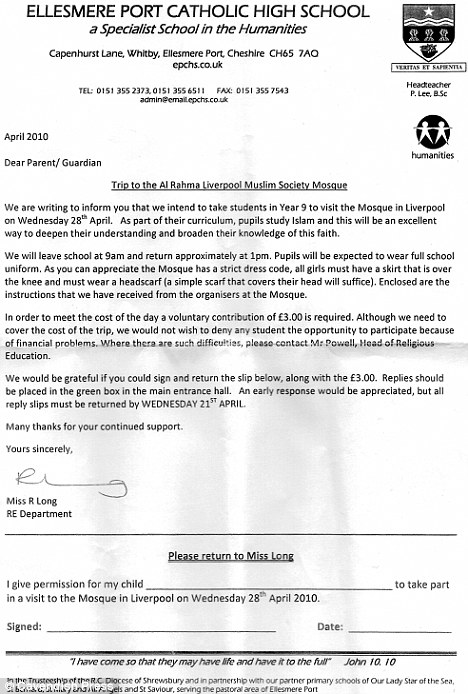 The Ellesmere Port Catholic High School letter to parents notifying them of the trip to the Al Rahma Mosque in Toxteth, Liverpool

‘It’s like they are saying she is playing truant for not wearing a head scarf. If the trip had been without the leggings and the headscarf, that would have been fine but I wasn’t having my daughter dressed in the Muslim way.

‘There are some parts of RE lessons that children who are Jehovahs Witnesses don’t have to attend because that’s part of their religion and the fact is Amy is Catholic and not a Muslim.

‘She’s proud of her school uniform and what it represents and she should be able to wear it like she would on any normal school trip.

‘She likes to learn, she takes history and she is really interested in it, she wants to learn, but she can do that her classroom without changing the way she dresses.

‘I even did some research on the internet about non-Muslims attending mosques and it says you don’t have to adhere to the dress code. 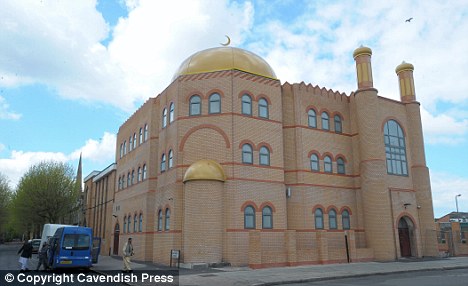 ‘I also fail to see how a three-hour trip to a mosque is of any educational value to a Catholic when she can learn about the Muslim faith in the classroom.

‘I can guarantee that if there were ten Muslim girls coming to our school it would adhere to what they wanted, because that’s their faith, their religion, their dress code.’

The school claimed it had arranged the trip in accordance with diktats sent down by Oftsted and the Roman Catholic diocese and said it to abide by a ‘strict dress code.’

Mrs Davies who has two other children said: ‘No sooner had I objected to the dress code, I got a phone call from her head of year saying I don’t see what the problem is, it teaches them respect. I said to her, is that not my job and your job as a school?

‘Then she asked it was a problem with the cost, and I told her not to patronize me. I said it was for religious reasons. I’m not a devout Catholic, I’ve never claimed to be but my daughter is a white, British Catholic girl – not a Muslim girl, therefore she is not adhering to a Muslim dress code.

‘The next thing Amy was in Mr Lee’s office with three other kids being told it was a compulsory trip. He gave me a parent consent form, but I didn’t give my consent and I was told it would be an unauthorised absence.

‘I’m so angry – in particular with the letter Mr Lee sent with bits underlined and words in block capitals. And also, you can’t tell me that by making some year nine kids attend a trip to a mosque is going to make his his OfSTED report look better. 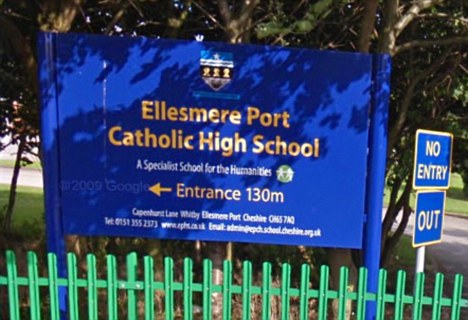 ‘I had to send a letter in to the school explaining why Amy was absent, and I explained exactly why Amy wasn’t there.

‘What really infuriates me is that if she wore leggings to school, she would be told to take them off because they’re not school uniform.

‘If Muslim girls came to Amy’s school, the school would probably allow them to wear their leggings and head scarf because it is respectful. If they were told to remove them, there would be uproar.’

Another parent Kirsty Ashworth, of Ellesmere Port, whose daughter Charlie Sheen was due to attend the trip said: ‘I didn’t see the educational benefit of it and I can’t see how it would help her get a job or anything like that.

‘I’m not racist or anything but I send my daughter to an English speaking catholic school, so I don’t see why she should dress as a Muslim.’

A spokesman for the school said: ‘In keeping with accepted good practice we are pleased to provide students with an experience of a visit to a Mosque and the chance to talk and question a representative of the community which it serves.

‘This is an exciting and for many, a unique opportunity to learn at first hand how Islamic practices and beliefs map against their own.

‘We hope to provide other experiences to further our students’ appreciation and tolerance for faiths and culture as opportunities present themselves, as all good schools will do in the name of education.’

6 Replies to “Britain: Catholic schoolgirls told to dress like Muslims for mosque visit or face truancy”