IT’S DOWN THE MEMORY HOLE!

After the Tundra Tabloids reported on the OIC’s publishing of the pig-Mohamed cartoon on its own website, the Danish paper Jyllands-Posten picked up the story yesterday, then today the Swedish paper SVD reported on it, and then the OIC pulled it from its website. 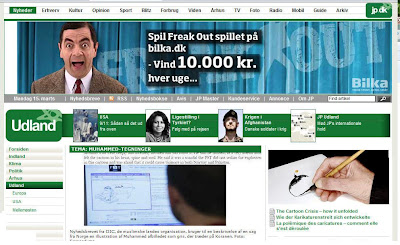 So the TT believes that the Baron’s take was right, when the infidel publishes a pic of Mohamed, it’s bad, but when a Muslim does it, especially the world’s largest Muslim organization, the OIC, then it’s ok, until they realize how hypocritical they look doing it. Baron Bodissey:

“Thus, under the clear guidelines of Islamic law, it is entirely possible that if someone says something factually true, but which does not benefit Islam, that person can be judged guilty of slander under sharia. This is the net that has snared Geert Wilders: the Amsterdam court is implementing sharia on behalf of the Muslims of the Netherlands, and therefore the truth is no defense.

Now let’s apply the same rules to Mohammed the Pig. The republication of the drawing in Norway is deemed harmful to Islam. Therefore the image has defamed Islam, which makes those who display it guilty of blasphemy under sharia. By a strict application of the law, the offending parties must be put to death.

But the OIC’s use of the same drawing is not harmful to Islam: it is intended to explain to faithful Muslims the iniquitous behavior of the infidels, and to illustrate the dangerous blasphemy in which they are engaged. The OIC is acting in the interests of Islam, for legitimate and sharia-approved reasons, and its actions benefit Islam. Thus no slander or defamation is involved in the Islamophobia report.

There are no contradictions, no double standards. Everything makes complete sense, and is as clear as a bell.

A good analogy from Vlad, when Blacks call each other the “N” word, it’s ok, but when a white person does….all hell breaks loose. KGS
Here is the PDF from the OIC site before they de-piged it.