The UK Independence Party [UKIP] is to launch a controversial bid to woo voters by unveiling a policy to ban the Muslim burka and the niqab.

The party backs the view that the burka, the cloak that covers Muslim women from head to toe, and the niqab, a veil covering the head, are an affront to British values.

UKIP hopes the policy, which is already being considered by a string of European countries, will broaden its appeal and connect it with white working class voters 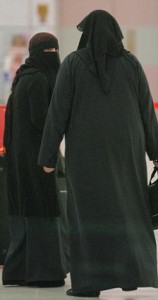 The party hopes to make further electoral gains after winning the second largest share of the vote in last June’s European elections.

Former UKIP leader Nigel Farage will announce tomorrow that the fabric of British society is under threat for Sharia law and concealing women’s faces in public is not compatible with traditional British freedoms and values.

Mr Farage, who stood down last year to fight the Buckingham seat of Parliamentary Speaker John Bercow at the general election, told The Times: ‘UKIP has always been good at showing what it is against, but we are now trying to demonstrate to voters how an independent Britain would be governed.

‘I am going to be talking about Britishness, about the national identity and the genuine threat that Sharia law poses.

‘Alarm bells should have sounded when the Archbishop of Canterbury said that the adoption of Sharia law in the UK was unavoidable.’

Mr Williams made his comments in February 2008, when he said Muslims did not necessarily relate to the British legal system and should not have to choose between ‘the stark alternatives of cultural loyalty or state loyalty’.

UKIP, which as yet has no seats in Westminster, says the two items of clothing have no basis in Islam and only act to encourage gender inequality. They are the first national party to call for an outright ban.

Danish Conservatives in the country’s coalition government have also demanded a ban on the burka and the niqab in public. And in October 2009 the Muslim Canadian Congress called for similar measures.

UKIP leader Lord Pearson of Rannoch added: ‘We are taking expert advice on how we could do it. 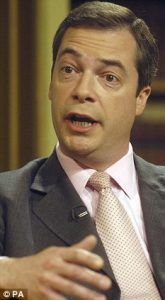 ‘It makes sense to ban the burka, or anything which conceals a woman’s face, in public buildings. But we want to make it possible to ban them in private buildings.

‘It isn’t right that you can’t see someone’s face in an airport.

‘We are not Muslim bashing, but this is incompatible with Britain’s values of freedom and democracy.’

The party plans to build towards an election footing with further announcements over the next two months on transport, healthcare, welfare and tax.

Specific pledges already include increasing the defence budget by 40 per cent and bringing back grammar schools.

The Muslim Council of Britain said most women who wear the burka do so out of choice.

3 Replies to “UKIP Vows to Ban the Burka”