From CNN thank you Islam in Europe

The video I include here from CNN has an interesting aspect to it. They discuss how the quaint practice of Muslim first cousin marriage is responsible for all these birth defects, and they point out that these people may not attend school past a certain young age because Muslims will not allow girls to have an education, yet somehow, CNN manages to leave the distinct impression that its all Israel’s fault. 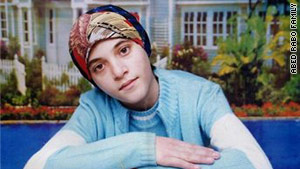 Until last summer Ahmed was living as a girl called Ola and posed for this family photo.

Nadir Mohammed Saleh and Ahmed Fayiz Abed Rabo are cousins and next-door neighbors. With their gelled hair, buttoned-down shirts and jeans, they look much like any other 16-year-old Palestinian boy. But looks, Ahmed says, can be deceiving.

“Only my appearance, my haircut and clothing, makes me look like a boy,” Ahmed says, gesturing with his hands across his face. “Inside, I am like a female. I am a girl.”

Until last summer, both Nadir and Ahmed were — for all intents and purposes — girls. They wore female headscarves, attended girls’ school and even answered to the female first names Navin and Ola.

Both Nadir and Ahmed were born with a rare birth defect called male pseudohermaphrodism.

Deficiency of the hormone 17-B-hydroxysteroid dehydrogenase (17-B-HSD) during pregnancy left their male reproductive organs deformed and buried deep within their abdomens.

At birth, doctors identified Nadir and Ahmed as girls, because they appeared to have female genitalia.

As a result, they spent the first 16 years of their lives dressing and acting like girls. It was a role that grew increasingly difficult to play, as they hit puberty and their bodies began generating testosterone, resulting in facial hair and increasingly masculine features.

“They used to travel by car to girls’ school and back,” says Nadir’s father Mohammed Sadih Ahmed Saleh. “Because of their facial hair, it was difficult for them to go out into the street. Psychologically they were distressed.”

Finally, on June 22, with the support of their families, both Nadir and Ahmed transformed themselves into boys.

There are an unusually high number of male pseudohermaphrodite births in the Gaza neighborhood of Jabalya, where Nadir and Ahmed live.

Dr. Jehad Abudaia, a Canadian-Palestinian pediatrician and urologist practicing in Gaza, says he has diagnosed nearly 80 cases like Nadir’s and Ahmed’s in the last seven years.

“It is astonishing that we have [so] many cases with this defect, which is very rare all over the world,” Abudaia says. He attributes the high frequency of this birth defect to “consanguinity,” or in-breeding.

“If you want to go to the root of the problem, this problem runs in families in the genes.” Abudaia says. “They want to get married to cousins… they don’t go to another family. This is a problem.”

In Western, more developed countries, doctors typically identify and then operate to correct disorders of sex differentiation at birth. But in war-torn Gaza, which has a lower standard of medical care, the birth defect can go undetected for years.

“Some of them unfortunately will be discovered late, when they are more than 14 years [old]. When they have been living as a female and they don’t have menstruation, then they will go to the gynecologist,” Abudaia says.

Abudaia’s first advice to patients with the disorder is to immediately adopt male clothing and hair cuts, and then to plan for a sex-change operation.

This unusual ritual has been performed several times in the extended family of Nadir and Ahmed, where sex differentiation is a recurring disorder.

Nadir’s 21-year-old brother Midyam and his 32-year-old cousin Ameen Abd Hamed share the same condition of male pseudohermaphrodism. As adolescents, they too underwent the gender identity transformation process the family refers to as “the transfer.”

The traumatizing experience is all the more difficult because Gaza is a socially-conservative society, where there is a fair amount of segregation between males and females.

“I sat down with Nadir and explained to him how to adapt to the street, how to sit with the guys and talk to them… because at the beginning his mental state was bad, just like what happened to me,” Ameen says.

Though Nadir and Ahmed clearly have the love and support of their family, they say that is not enough. They are appealing to the international community to help them get the expensive and complicated sex-change operations they say they need to live normal lives.

“It’s the only obstacle and the source of all the problems,” Nadir says.

Until the sex-change operation is completed, Palestinian officials won’t change the gender on their identity cards to “male,” thus restricting their access to higher education.

In addition, Nadir and Ahmed complain of health problems like kidney infections due to complications resulting from the disfigurement of their genitalia.

“This is 100 percent a humanitarian issue,” says Nadir’s father, Mohammed. “There are four conditions in the same [extended] family. If we propose conducting the same operation on all four of them, the cost would be $30,000. We don’t have $30,000 and there is no advanced medicine in Gaza.”

Until then, these troubled Palestinians say their genders and their identities will remain in conflict, much like the land around them.