To bad these ‘soul mates’
aren’t cell mates
“Ilich” Ramírez Sánchez was and still is an unrepentant murderer and terrorist, who is personally responsible for the killing of six people and wounding scores more. The man has been sitting in a French jail ever since his conviction in 1997 and is presently serving a life sentence. This is a man that Venezuelan fascist dictator, Hugo Chavez, (you see fascists and communists find it very easy to switch back and forth) deems a hero.

It wouldn’t surprise the Tundra Tabloids to find out that Hugo Chavez has converted to Shiia Islam, it would just be a natural evolutionary step for the revolutionary tyrant of Venezuela. A staunch communist, now a staunch fascist, becoming a staunch Muslim would be a hat trick for the man who seeks to turn S.America into a swamp of socialism with strong ties to the Muslim Middle East. KGS 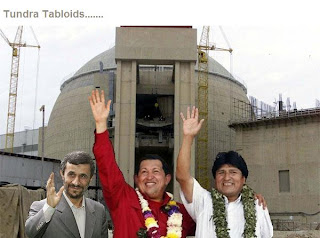 Heil Hussein!
Chavez praises Carlos the Jackal
CARACAS, Venezuela (al-AP) – Hugo Chavez is defending alleged terrorist mastermind Carlos the Jackal, saying the Venezuelan imprisoned in France was a “revolutionary fighter” rather than a terrorist.
The Venezuelan president praised Carlos—whose real name is Ilich Sanchez Ramirez—during a speech Friday night saying: “I defend him. It doesn’t matter to me what they say tomorrow in Europe.”
Ramirez gained international notoriety during the 1970s and 80s as the alleged mastermind of deadly bombings, killings and hostage dramas. He is serving a life sentence in France for the 1975 murders of two French secret agents and an alleged informant.
“They accuse him of being a terrorist, but Carlos really was a revolutionary fighter,” Chavez said during a televised speech to socialist politicians from various countries, who applauded.
Chavez has previously called Ramirez a friend, and a controversy erupted in 1999 after the leftist leader confirmed he had written a letter to him in prison, in response to a note from Ramirez.
Chavez’s remarks on Friday were his most strident yet in support of Ramirez. He said he believes Ramirez was unfairly convicted, and called him “one of the great fighters of the Palestine Liberation Organization” at the time.
Ramirez was captured in Sudan in 1994, and whisked in a sack to Paris by French agents. He was convicted three years later.
He is also accused of having a role in two 1982 bombings—on a Paris-Toulouse train and outside the Paris office of an Arab-language newspaper—and is suspected in two other train bombings on Dec. 31, 1983.
See