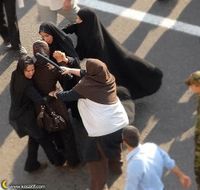 R.E.A.L… – “Jerusalem/Riyadh, Oct 5 : A plan by Saudi Arabia’s vice police to set up a human-rights division within its ranks to improve its image has been described as the biggest joke in history by human rights
activists.”
– “‘This is the best joke in history. The commission and human rights? How can two opposites sit together! Get real. The commission and its activities go completely against human rights and freedom,’ wrote A-Salihi.”
– “The Jerusalem Post quoted Wajiha Al-Huweidar, a Saudi human-rights activist, as saying the move was nothing short of hypocritical.”
– “‘Since when is interfering in people’s private lives part of the human-rights agenda?’ she asked The Media Line rhetorically. ‘It reflects what they do. They harass people all year long and during holidays they give away candy to people,’ Al-Huweidar said.”
– “‘The religious police know very well that most Saudis want to see them disappear from streets and public places, because they only represent aggressiveness and oppression,’ Al-Huweidar said.”
– “‘I think the Saudi government has realized that its reputation is damaged worldwide and its image is ruined among Saudis, so now they are trying to beautify this repressive institution by using a new slogan… The religious police have to understand their time is over and they have to go,’ he added.”
– “Other human-rights activists welcomed the idea. ‘We think this is a good thing and an appropriate step,’ Muflih Al-Qahtani, president of the Saudi National Society for Human Rights, told The Media Line. ‘We hope this unit will play an active role in spreading the culture of human rights and work on protecting people from any violations they are exposed to,’ Al-Qahtani said. ‘It should be noted that the recent changes in the way the members of the commission have dealt with issues, and their efforts to become closer to the different social levels, indicates a desire to protect rights,’ he added.”
– “The Commission for the Promotion of Virtue and the Prevention of Vice, the kingdom’s religious police, has come under fire over the past few years for their strict and sometimes brutal clamp-downs on what is perceived as un-Islamic behavior, fueling international criticism of Saudi Arabia’s human-rights record.”
– “The organization enforces religious rules such as a ban on men and women mixing, Islamic dress code, prayer attendance and the prohibition on the possession and consumption of alcohol.”
– “The features of the restructured commission would include restructuring the legal administration and creating new units, among them one that will deal with human rights.”
– “This new unit will begin operating shortly under the direct supervision of the commission’’s director and it will deal with human rights ‘in accord with just Islamic principles and international rights treaties.’”
– “The decision to set up the human-rights unit coincides with several cases for which Saudi religious authorities are coming under scrutiny from human-rights organizations.”
– “Saudi Arabia is governed by a strict interpretation of Islamic law known as Wahhabism. Earlier this year Saudi King Abdallah Bin Abd Al-Aziz initiated sweeping reforms which included firing the head of the religious police. It is thought that the reforms were an effort to moderate the country’s leadership and present to the West a more toned-down image of the Saudi kingdom.”