From The DailyMail U.K.

Home Office staff were officially warned not to eat in front of their fasting Muslim colleagues during Ramadan – in case it made them feel hungry.

The advice came in a taxpayer-funded internal document listing do’s and don’ts during the Muslim holy month, which ends this weekend.

But the guide is now at the centre of a row with Islamic groups who said it was more likely to incite hatred of Muslims than promote understanding. 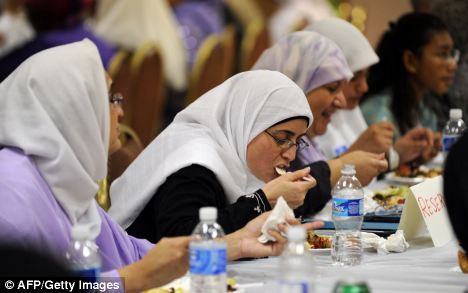 Fasting: During the holy month, devout Muslims do not drink or eat from dawn until sunset and must avoid ‘all obscene and irreligious sights and sounds’

The Home Office Islamic Network produced the five-page information sheet which says: ‘In practical terms, please be sensitive when eating lunch near a Muslim colleague who is fasting.

This can make an individual feel hungrier and make it more challenging to observe the fast.’

During the holy month devout Muslims do not drink or eat from dawn until sunset and, according to the document, must avoid ‘all obscene and irreligious sights and sounds’.

It also urged Home Office managers to be flexible over working arrangements.

It says: ‘The most likely need Muslim staff may present to managers during this period is for flexibility around working hours and break times as those fasting will have a slightly different routine from usual. Managers and Muslim staff should discuss what their needs are and be responsive and sensitive.’

Managers were also told: ‘Muslim staff who are fasting and whose environment allows it may wish to set out for work earlier than usual and finish their working day correspondingly early…in line with flexi-time arrangements.’

Last night a Home Office spokeswoman confirmed the document had been distributed to its staff and posted on the department’s internal intranet system.

She said: ‘It is not formal departmental guidance and was written by volunteers.’

The spokeswoman added that the Islamic Network was one of a number of staff faith and equality groups within the Home Office and was paid for by the taxpayer.

The Muslim Public Affairs Committee, which claims to be fighting a ‘political jihad against Islamophobia’, attacked the document.

It said: ‘It is designed to create more hatred in the hearts of non-Muslims.

‘We don’t care how much non-Muslims eat in front of us.

‘It’s never been an issue and never will be and we have never asked for any special treatment or sensitivity from non-Muslims whilst fasting.’

2 Replies to “No eating near Ramadan fasters, Brit workers told”