Every time one of these converts to Islam is arrested for planning to attack and kill people I am reminded of the stories one hears of gang initiations that call for the new recruit to commit a random act of violence so that the rest of the thugs will accept him. 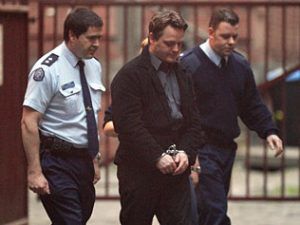 news.com.au… A HOME-GROWN terrorist who was committed to violent jihad was jailed this afternoon.

He has already spent 1115 days in custody.

Justice Bongiorno told Kent, 32, in sentencing: “I am not prepared to accept on the material proferred, that he (Kent) has abandoned the cause of violent jihad.

“There is no admissable evidence of his having done so, or of his being genuinely contrite for what he did.”

Kent, of Campbellfield, was sentenced to four-and-a-half years to being a member of a terrorist organisation, and two-and-a-half years on a second charge of recklessly making a document connected with preparing a terrorist act, but the two will be served partially concurrently.Kent was a drug abusing depressive who was persuaded to seek spiritual guidance from an extremist cleric by his Muslim wife and mother-in-law.

His plea hearing in August was told he helped create an Islamic propaganda jihadist video featuring Osama bin Laden, tributes to “martyrs” and a graphic image of a dead young extremist.

Kent pleaded guilty in July to one count of being a member of a terrorist organisation, a Melbourne terror cell, between July 2004 and November 2005.

He also admitted a reduced count of recklessly making a document – the jihadist video – connected with preparing a terrorist act.

He changed his plea when he was about to go to trial on charges he belonged to a Melbourne terror cell.

The jihadist video was posted on a At-Tibyan website, which was supportive of al-Qa’ida.

Prosecutor Lesley Taylor told the plea hearing Kent was committed to the terror organisation and showed his commitment to violent jihad.

She told the court Kent had been found with a vast amount of jihadist material after he returned from Dubai in 2003, including “macabre” videos of beheadings, footage of car-bombs and al-Qa’ida training manuals.

Ms Taylor said Kent was disappointed he did not get credit for helping to create the jihadist video.

Justice Bongiorno was shown a photograph of the fair-skinned father of three and former house painter in mujahidin clothes and carrying a fake AK47 assault rifle in his Melbourne back yard.

Kent spent three years on remand but was on bail prior to his plea hearing.