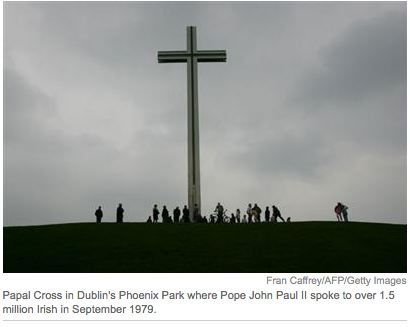 DUBLIN — The Irish government plans to bring into force a new law in October that critics say is a return to medieval justice.

The legislation, aimed at providing judges with clear direction on the 1937 Constitution’s blasphemy prohibition, imposes a fine of up to 25,000 euros — about $39,000 — for anyone who “publishes or utters matter that is [intentionally meant to be] grossly abusive or insulting in relation to matters held sacred by any religion, thereby causing outrage among a substantial number of the adherents of that religion.”

Police with a search warrant will be able to enter private premises and use “reasonable force” to obtain incriminating evidence.

The initiative has stunned some Irish and international commentators who say it contradicts Ireland’s recent emergence as a more multicultural, tech-savvy country that has in recent years showed its independence from the Roman Catholic church by liberalizing its divorce law.

“It is a wretched, backward, uncivilized regression to the Middle Ages,” said prominent atheist author Richard Dawkins in a statement last month, arguing that the law risks shattering Ireland’s new image as a “modern, civilized . . . green and pleasant silicon valley.”

One Canadian publication lightheartedly warned lawyers attending the Canadian Bar Association’s annual conference in Dublin this month to watch their language as they head out to one of the countless pubs in Ireland’s capital.

A blog in the New York Times, meanwhile, featured in its coverage a YouTube link to a famous blasphemy scene from the Monty Python comedy classic Life of Brian.

While some have noted that even countries like Canada still have their own blasphemy laws still on the books, the prohibition in western countries is typically considered obsolete.

Canada’s last prosecution was in 1935, and the statute is now trumped by free speech provisions in the Charter of Rights.

“There are a lot of countries that have blasphemy laws but typically they aren’t enforced. The United Kingdom abolished theirs last year. These are hangovers from earlier times and certainly in most western countries are anachronisms. Introducing a new blasphemy law seems irresponsible to us.”

Nugent said his group intends to come up with a suitably outrageous blasphemy to challenge the law if Ireland’s justice minister, Dermot Ahern, implements the law — passed by parliament in July — in October.

Ahern has angrily dismissed critics, arguing that, as a republican, he would have preferred to have no blasphemy law at all.

He said he was obliged to come up with clear provisions after the Supreme Court, in a blasphemy ruling a decade ago, dismissed the case because the state had provided no clear definition or sanctions.

A spokesman for Ireland’s legal community, meanwhile, said he accepts Ahern’s rationale that the new law was a logical compromise between doing nothing and holding a referendum.

Ken Murphy, speaking for the Law Society of Ireland, said he doesn’t expect a legal crackdown on blasphemers and suggested that the media reaction is overblown.

“It seems to be more an issue for the international media than it is for the people of Ireland,” he told Canwest News Service.

But the critics are questioning why the government didn’t just live with the legal void.

Media reports say there is no indication that the Roman Catholic church, still reeling from a report earlier this year about widespread sexual abuse at homes for children over many decades, has taken a position on the matter or lobbied government.

“No one can think of a single thundering priest, austere vicar, irate rabbi or miffed mullah ever calling for tougher penalties for blasphemy,” wrote Padraig Reidy in the British newspaper The Guardian.

While Ahern has said the likelihood of a blasphemy prosecution is minimal, Nugent said the law as written creates an incentive for groups to show the kind of widespread “outrage” required to justify a prosecution.