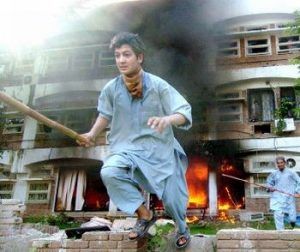 The official death toll in the Gojra massacre now stands at eight. A 35-year-old man succumbs last night to injuries he sustained during the attack by Muslim fundamentalists. Rights activists and minority leaders believe the government condones such attacks by tolerating laws that punish offences against Islam. The Catholic Church of India and Geneva-based World Council of Churches express their solidarity with fellow Christians in Pakistan.

Lahore (AsiaNews) – Pakistan’s parliament has unanimously condemned the attacks against Christians as an inquiry gets underway to quickly find the culprits. Pakistan’s President Asif Ali Zardari announces a compensation package for victims’ families. In spite of all of this Pakistani Christians continue to endure violence and discrimination as the death toll in Gojra rose to eight. For human rights activists and minority leaders blasphemy laws are the cause of the problem.Last night a private TV station announced that a 35-year-old Christian man succumbed in Gojra hospital to the injuries he sustained last Saturday, when a Muslim mob went out of control and attacked the local Christian community.
Federal Minorities Minister Shahbaz Bhatti and Punjab Governor Salmaan Taseer handed a preliminary report to President Asif Ali Zardari on the recent riots in Gojra where a semblance of calm is in place following the massive deployment of security forces.

Pakistan’s National Assembly unanimously adopted a resolution condemning the Gojra killings and asking the Punjab government to bring the culprits to justice. For the lawmakers the killings are conspiracy designed to defame Pakistan and Islam.

Promises and announcements aside Pakistan’s Christian community is still up in arms against the latest episode of violence committed in the name and under the protection of the blasphemy laws, which have become a pretext to attack religious minorities.

For Minorities Minister Bhatti, who is Catholic, the “allegations of desecration of the holy Qur‘an, which were used as an excuse by banned groups to foment violence on such a big scale, were baseless and without grounds.”

The “killing of Christians, rape of Christian women, enforced conversion and allegations of blasphemy” rise whenever the “Pakistan Peoples Party (PPP) or the Pakistan Muslim League Nawaz (PML-N) come to power. [. . .] both of these political parties played a role” in the enforcement of “blasphemy laws which are the root cause of Islamic militancy,” said Nazir S Bhatti, president of the Pakistan Christian Congress (PCC).

The Catholic Bishops’ Conference of India (CBCI) and the Geneva-based World Council of Churches have also publicly expressed their solidarity with the Christians of Pakistan.

The “Church in India is deeply saddened and anguished by events in Pakistan,” Archbishop Stanislaus Fernandes told AsiaNews.

“I spoke to the Archbishop of Lahore (Mgr Saldanha) and expressed our grief and assured him of the prayerful solidarity of the Church in India,’ the archbishop said.

The prelate, who is the CBCI chairman, called on the Pakistani government to “provide security to minorities” because no group “should feel alienated or discriminated” on the basis of religion.

The death of Christians on Saturday in the Gojra “reconfirms the fear that the government is constantly failing to protect its citizens,” said Samuel Kobia, general secretary of the World Council of Churches (WCC), in a letter he wrote to President Asif Ali Zardari.

Such episodes of mass killing are the consequence of the blasphemy laws which should be abolished because they violate the fundamental rights of citizens.

One Reply to “Blasphemy laws, a pretext to attack Pakistan’s religious minorities”