It is a good bet that behind closed doors world leaders all think what we do on these matters. When an ‘art exhibit’ encourages people to desecrate a bible most of us think to ourselves or say to the fellow next to us, “I wonder why they don’t do that to a Quoran.” But world leaders have to watch what they say in public as it tends to have more serious consequences. So there is usually silence on these things from high up as anoying as that often is to most of us. So when the Vatican actually took a public position, it is remarkable.

It wouldn’t happen to the Koran: Pope attacks Glasgow art gallery’s invitation to vandalise a Bible 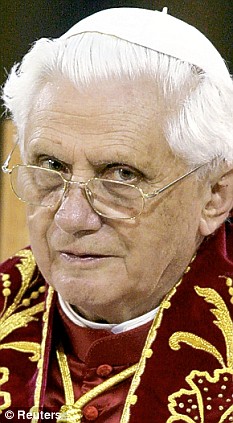 Pope Benedict XVI believes the stunt would not have been contemplated with a copy of the Koran
The Pope has condemned a ‘ disgusting’ taxpayer-funded exhibition in which visitors are urged to deface the Bible.

Visitors were offered pens by gallery bosses so they could scrawl comments on the text – leading to a host of puerile and obscene remarks.

Pope Benedict XVI believes the stunt would not have been contemplated with a copy of the Koran.

His anger over the show, organised by council-funded arts body Culture
and Sport Glasgow, was expressed by a senior Vatican priest.

The adviser to the Pope said: ‘It is disgusting and offensive. They would not think of doing it to the Koran.’

Public complaints about the exhibit at the prestigious Gallery of Modern Art in Glasgow have forced organisers to put the vandalised Bible on show in a locked case, while still allowing visitors to write comments on blank sheets of paper.

The Made In God’s Image exhibit is the work of Glasgow artist Anthony Schrag.
He wanted gays and transsexuals who felt left out of religion to ‘write their way back in’ to the holy text.

Mr Schrag worked with members of the Metropolitan Community Church (MCC) in Edinburgh on the project. But MCC minister Jane Clarke said: ‘I had hoped people would show respect for the Bible.

I am saddened some have chosen to write offensive messages.’
Read more: http://www.dailymail.co.uk/news/worldnews/article-1202632/Pope-attacks-art-vandalising-Bible.html#ixzz0Mf4kqdQQ

2 Replies to “The pope even speaks about it now. “No desecration of Quoran?””