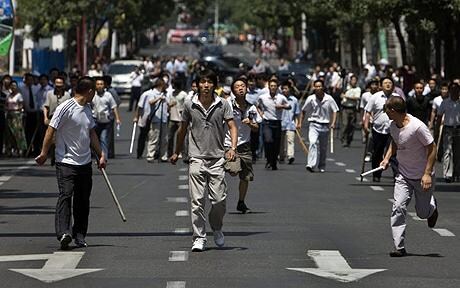 The local government in Xinjiang has already said it will apply the death penalty to the instigators of the clashes between local Uighur Muslims and Han Chinese Photo: EPA

The local government in Xinjiang has already said it will apply the death penalty to the instigators of the clashes between local Uighur Muslims and Han Chinese Photo: EPA.
Al-Qaeda in the Islamic Mahgreb (AQIM) said it would target the 50,000 Chinese workers in Algeria and elsewhere in Northern Africa.
Two extremist web sites affiliated with al-Qaeda also made threats against the large numbers of Chinese people working in Saudi Arabia and the Middle East.

“Chop off their heads at their workplaces or in their homes to tell them that the time of enslaving Muslims has gone,” read one posting.
It is the first time that any al-Qaeda group has threatened China or its interests and illustrates the high price that Beijing may pay for the riots in Urumqi, in which at least 136 Han Chinese and 46 Uighurs died last week.
Beijing’s nervousness over its vast interests in Africa and the Middle East was underlined by the Foreign ministry, which rushed to reassure Muslims that China was not oppressing the Uighurs in the desert province of Xinjiang.
“We hope that our Muslim brothers can realise the truth of the July 5 incident in Urumqi. Once they know the truth, they would support our ethnic and religious policies and the measures the Chinese government has taken to deal with the incident,” said a spokesman.
The Foreign ministry was also quick to deny a charge of genocide against the Uighurs that has been levelled by Turkey, which, together with Iran, has emerged as one of Beijing’s sternest critics over the events of the past week.

“In which country could this be called genocide?” said a spokesman. “In 1949, the population of Uighurs in Xinjiang was 3.29 million, at present the Uighur population there is nearly 10 million, or three times more than 60 years ago. What kind of ethnic genocide is this?” he said.
Justin Crump, the head of terrorism analysis at Stirling Assynt, a London-based risk analysis group, said his company had come across threats from AQIM in the course of its normal monitoring.
“China has been able to operate with impunity in Afghanistan and Pakistan. al-Qaeda and the Taliban have left Chinese well alone,” he said.
But a report from his firm said: “There is an increased amount of ‘chatter’ on the internet among active Jihadists, who claim they want to see action to avenge the perceived injustices in Xinjiang.
“Some of these individuals have been actively seeking information on China’s interests in the Muslim world which they could use for targeting purposes,”
Three weeks ago, AQIM ambushed an Algerian security team protecting a Chinese construction project and killed 24 guards.
“Future attacks of this kind are likely to target security forces and Chinese engineers alike,” said Stirling Assynt’s report. “They come across the Chinese a lot in the area and AQIM are likely to take the opportunity [when it presents itself],” said Mr Crump.
China’s interests in Yemen could also be a target, since al-Qaeda is actively trying to topple President Ali Abdullah Saleh.
However, Mr Crump said the terrorist group’s senior leadership was unlikely to endorse a full-scale jihad against China. He also added that there is no significant link between Uighur separatist groups in Xinjiang and Osama bin Laden’s network.
AQIM, which wants to impose an Islamic state in Algeria, was founded in the mid-1990s and pledged allegiance to Osama bin Laden in 2003.
The huge oil and gas reserves in Xinjiang, as well as the web of pipelines that run through the province, funnelling energy from Kazakhstan and Russia all the way to Beijing and Shanghai, make the province vital to China’s interests.
However, China’s policy of total control has upset Islamic states, especially in the past week. Protesting Muslims in Indonesia called for a jihad against China on Monday, clashing with police outside the Chinese embassy in Jakarta.