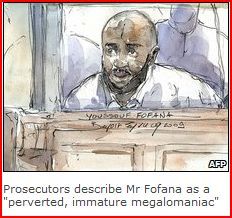 Another Muslim that says, “Screw that religion of peace crap. Let’s kill us some Jews.”

Youssouf Fofana has been sentenced to life in prison for the brutal murder of a 23-year-old Jewish man in 2006. Another 26 members of the so-called Gang of Barbarians were also charged in connection with the crime – 24 received jail sentences. Emma Jane Kirby has been following the 10-week trial.

On 29 April gang leader Youssouf Fofana, 28, took his seat in court, smiling defiantly and declaring: “Allah would be victorious.”

After more than two months of closed-door hearings, Mr Fofana, rejecting any help from lawyers, was allowed to express his opinion in court for the last time.

Mr Fofana, a gang leader from just outside Paris, stood accused of the murder of Ilan Halimi, a young Jewish man who worked in a mobile phone shop.

It was alleged that Mr Fofana instructed a female gang member to lure Mr Halimi into an empty apartment in Bagneux, where he was attacked, beaten and drugged.

Mr Fofana is said to have targeted Mr Halimi because he believed that “Jews are loaded”.

The victim was eventually found naked and tied to a tree near a railway. He had been stabbed and set alight. He died on his way to hospital.

Mr Halimi’s distraught mother had asked for this trial to be held in public.

But because some of the 26 people accused of participating in this crime were minors, proceedings have been held behind closed doors.

More than 160 witnesses have given evidence and 50 experts have testified during the trial.

The French-born son of immigrants from Ivory Coast, Mr Fofana was the only member of the Barbarians gang facing a life sentence if found guilty.

He was charged with kidnap, torture, premeditated murder and anti-Semitism.

The other gang members – young men and women – were accused of a variety of crimes, including entrapment, kidnap and failing to assist a person in peril.

All insisted that Mr Fofana had promised to release his victim when Mr Halimi’s father failed to deliver a ransom. They claimed they did not know their self-proclaimed leader would take the crime so far.

The lawyer for Mr Halimi’s family, Francis Szpiner, claimed the other gang members played a huge role in the crime and should be punished accordingly.

After Mr Halimi’s death, he fled to Ivory Coast where he is reported to have made death threats by telephone to Mr Halimi’s family.

He was extradited to France in March 2006 and initially admitted murder. But since then he has repeatedly changed his plea, and his legal team.

He has also bombarded the magistrates investigating the case with letters full of anti-Semitic insults.

In court he tried repeatedly to justify his actions by citing “the suffering of the Palestinians and Africa”.

But lawyers claimed Mr Fofana has a fuzzy knowledge of the Muslim faith. He was unable to explain the difference between a Sunni and Shia Muslim and could not recite verses from the Koran.

Expelled from court in June for throwing his shoes at lawyers, Mr Fofana has often refused to answer questions.

But 24 days into his trial, he was asked about the fatal blows that Mr Halimi suffered and he yelled: “Yes, it’s me that did it! You know very well that I did it!”

At the start of proceedings, Mr Fofana was required by the court to give his birth date.

He declared that he was born on 13 February 2006 in Sainte Genevieve des Bois – the date and place of Mr Halimi’s death.

Many in France’s Jewish community – the largest in Western Europe – say there has been a rise in anti-Semitism among disaffected Muslim youths of Arab and African origin since a Palestinian uprising started in late 2000.

But Michel Wieviorka, the author of a book on anti-Semitism in France, says the motive for the murder was money first.

“Anti-Semitism added to what happened,” he told journalists at the start of the trial.

“Initially it wasn’t about expressing hatred of Jews… the target was a Jewish man because Jews are supposed to have money and are believed to look after their own, so they’ll pay up.”

The case has come to symbolise not only a rise in anti-Semitic violence in Paris’ poor and multi-ethnic suburbs, but also the power of local gangs in the Parisian sink estates.

Lawyers for some of the gang members who are accused of failing to report the crime have defended their clients’ silence by telling the court that the “law of the estates is that you just don’t snitch”. It’s not enough they want the law of Islam taken into account. Now they want the code of criminals to be acknowledged.

These are estates, the defence lawyers insisted, that have been forgotten by France, but each gang member living there looks out for the next.

2 Replies to “Gang leader gets life for killing Parisian Jew”