You may remember this particular meat packing plant from being in the news before. Something about striking workers due to Muslim prayer times and other Islamic related complaints: 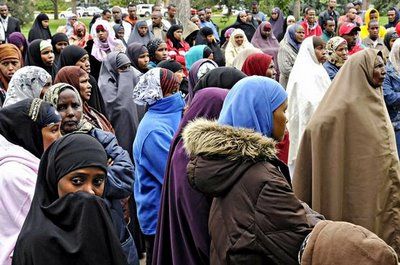 Workers from the Meat Plant in previous dispute

GREELEY, Colo. —  JBS Swift Beef Co. of Greeley, Colo., is voluntarily expanding its beef recall to include about 380,000 pounds of products because of possible E. coli contamination.

A recall earlier this week involved about 41,000 pounds of products.

The USDA says an investigation by its Food Safety and Inspection Service of 24 illnesses in multiple states prompted the company to re-examine its food safety system. The department says 18 of the illnesses appear to have the same cause, and the company is conducting the recall “out of an abundance of caution.”

More on this from Jihad Watch which is all over this story:

The Swift company has been working hard to accommodate its Muslim workers, but they are still not satisfied, and are demanding even more accommodation. They are not demanding equality of treatment — no other religious group has special accommodation at Swift. Rather, they are demanding that they be given privileges above and beyond those granted to other employees. Previously the company has adjusted its schedule to accommodate the Ramadan fast, over the objections of non-Muslim workers. Swift also committed the grave sin of firing Muslim workers who were most active in trying to strong-arm and intimidate the plant into further concessions. And that effort has not ended.

No one knows when this accommodation will stop, because no one has ever thought to ask or dared to ask Muslim groups in the U.S. just how much Sharia accommodation will satisfy them, and at what point they would be willing to begin to adapt to American society. And of course, if anyone ever did ask such a question and Muslim leaders answered in accord with the traditional canons of Islamic law, the answer would be that they will not stop demanding Sharia accommodation until the whole of Islamic law is implemented in the U.S., the Constitution overturned, and America is under Sharia government.

There is always more Sharia to accommodate, and now the precedent is being set all over the country that American businesses and institutions must change their practices in order to accommodate Sharia, but no one cares. Someone will draw the line somewhere, somehow, before it’s too late, won’t they? We’re all one big happy multicultural family, aren’t we? Aren’t we?

Stealth Jihad Update: “Civil-rights complaints investigated,” by Bruce Finley for the Denver Post, June 29 (scroll down), with thanks to Pamela:

Chavez met with Somalis in Greeley last week. He said federal officials are taking the lead on the investigation….

Concerns surfaced last year after JBS managers refused to let late-shift Somalis pray at sunset during the Islamic holy month of Ramadan. Workers walked off the job, and more than 100 were fired. Somali workers have since claimed ongoing issues with their Latino supervisors, Chavez said.

“They believe they were treated differently because they were Somalis,” he said.

JBS spokesman Chandler Keys said the company has attempted to accommodate religious practices by installing foot washes in locker rooms for foot-cleansing prior to prayer and bidet-type spray devices on toilets to assist with cleansing after using the rest room.

Keys would not discuss the complaints or the investigation. He said company officials “are in discussions” with Somalis regarding Ramadan this year.

“It’s an ongoing, flowing information dialogue that’s going to keep us on our toes in working with these people,” he said.

Yes, they sure are going to keep you on your toes, Keys.

Refugee Resettlement Watch has some illuminating background on this case, as well as on Sayyid Qutb (not Qtub) and Greeley, Colorado’s role in the modern-day jihadist movement.