Sarkozi’s comments have at last opened a debate that should have happened in the free world (read non Muslim world) literally decades ago. I remember in the 1980s reading about men on motorcycles slaughtering women and school girls in Algeria at bus stops for not wearing certain garments.

At the time, I thought perhaps there was something wrong with nations that began with an A. Afghanistan, Algeria, Albania, Azerbaijan. It wasn’t until some years later I came to realize it has more to do with the fact that in all those nations people think in a manner that begins with an I. 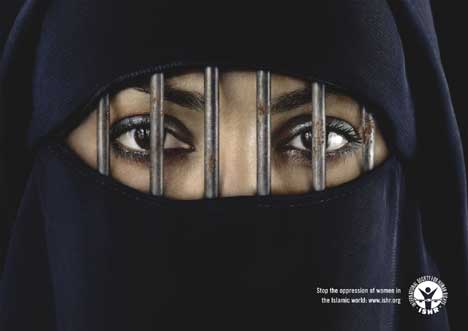 Phyllis Chesler, one of the very few feminist writers who actually is a feminist wrote a column today which I feel all need to read here.

“A 1994 fatwa legalized the killing of girls and women not wearing the hijab (which in Algeria consists of a scarf that hides the hair and neck and a full-length robe; veil is not an accurate translation); another fatwa legalized kidnapping and temporary marriage. … Muslim women do not have the right to work outside the home, become political leaders, or participate in sports. They should not wear makeup, perfume, fitted clothes, or mingle with men in public; they should wear the hijab, ‘which not only establishes the distinction between masculine and feminine, but underscores the separation between public and private’ …According to El Mounquid, the official FIS journal, the hijab distinguishes Muslims from non-Muslims; it is obligatory for Muslim women and not an individual decision.”

There is a specific and important point that urgently needs to be known and understood by people in the western world. Islam is simply not like Catholicism Judaism or any offshoot of either. Islam forces people to it. If you are a Muslim women you obey draconian rules which are tantamount to complete loss of freedoms and even personal identity in ways most of us cannot imagine. If you chose to leave Islam, you are killed where the numbers of Muslims are high enough to allow this with some impunity. Sharia courts which are rapidly growing all over the western world especially in the UK are NOT the same as Catholic or Jewish family law ones no matter what the gonadless premiere of Ontario claims when he eliminated them all in the interests of fairness. Certainly a lesser evil than allowing sharia ones but stupid in that it showed a lack of understanding of what Islam and sharia actually are.

One does not eliminate all things called showers merely because one culture at one time insisted on forcing other people into ones where instead of water they produced cyanide gas. The issue was the poison, not the name of the delivery system.