What a strange place an Iranian prison must be. I wonder if people arrested for reporting on events will out number those arrested for theft or assault? 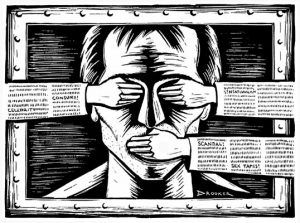 The National Post–A Canadian journalist working in Iran was arrested without charge on Sunday and has not been heard from since.

Maziar Bahari, 42, a correspondent for Newsweek magazine, has been reporting on Iran for the past decade from his base in Tehran, where he was born.

His most recent article for Newsweek, published in the aftermath of Iran’s disputed presidential election, examined opposition supporters’ concerns that groups loyal to President Mahmoud Ahmadinejad were staging violent incidents at their rallies to undermine support for their movement.

“Newsweek strongly condemns this unwarranted detention, and calls upon the Iranian government to release him immediately,” the magazine said in a statement.

Bahari, who holds dual citizenship in Iran and Canada, is also a prominent documentary filmmaker. He graduated with a degree in communications from Montreal’s Concordia University and has since made a handful of films that provide trenchant glimpses inside contemporary Iranian culture.

Since 1998, Bahari has been Newsweek’s Iran correspondent. Over the years, his work for a U.S. magazine resulted in repeated brushes with Iranian authorities.

In a 2007 dispatch for the British political magazine New Statesman, Bahari pointedly described his encounters with Iranian intelligence agents, who often go by the pseudonym Mr. Mohammadi and prefer to hold their interrogations over tea at hotels.

“There are so many social and economic problems in Iran, that if someone wanted to exploit them to create dissent it wouldn’t be difficult to do so. But most activists I know inside Iran … resent the American government much more than their own. In the meantime, the Iranian government tries to find foreign perpetrators and domestic accomplices instead of solving the root causes of dissent, such as mismanagement of the country’s economy, poverty, internal migration and drug addiction.”

The Paris-based media advocacy group Reporters Without Borders said Sunday that 23 Iranian journalists have been arrested since the disputed June 12 election.

Even before that, Iran had routinely jailed popular bloggers, notably Hossein Derakhshan, an Iranian-Canadian who was arrested last November and charged with spying for Israel.