I really hope the governments and citizens of Europe are paying close attention to the events unfolding this week in Iran. I wonder if they will realize that this is what they can expect once their Muslim population is the voting majority in their respective countries. Hard line Muslims have told the world through speech and action that they are willing to kill and die to impose Islamic law wherever they see fit. So heads up Europe. Not like you haven’t been warned a hundred times before. 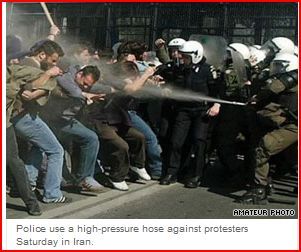 TEHRAN, Iran (CNN) — Thousands of defiant protesters clashed with police in the streets of Tehran on Saturday in protest of last week’s presidential elections, and opposition leader Mir Hossein Moussavi reportedly said he was ready for “martyrdom.”

Police were using tear gas, clubs and water cannon as they tried to disperse the demonstrators.

A stream of videos posted on social networking Web sites appeared to show demonstrators who had been shot.

One video showed a woman trying to protect a man being beaten and kicked by protesters. A motorcycle lies on its side nearby, and another is in flames.

The protests were held in open defiance of warnings issued Friday by Iran’s supreme leader, Ayatollah Ali Khamenei, and the Islamic Republic Security Council. They had said protest organizers — specifically Moussavi — would be held accountable if the protests led to bloodshed.

The message on Moussavi’s page on Facebook urged Moussavi’s supporters to “protest” and “not go to work.” The social networking Web site has proved to be a key source of information in a country whose government has banned international journalists from newsgathering.

The authenticity of the information could not immediately be established, but its posting coincided with growing unrest by demonstrators, who say President Mahmoud Ahmadinejad’s election victory was rigged.

Witnesses in Tehran told CNN one crowd was chanting “Death to Khamenei!” and “I will kill whoever killed my brother!” — a chant that dates to Iran’s 1979 Islamic revolution that brought Ayatollah Ruhollah Khomeini to power.

In a story posted Saturday on the Web site of the government-run Press TV, Iran’s deputy police commander said 400 police personnel had been wounded since the opposition rallies began last weekend.

Radan said 10,000 complaints had been filed by people asserting that their daily lives had been disrupted, adding, “They have called on the police to deal with rallies firmly.”

Meanwhile, the head of Tehran’s Emergency Center, Reza Dehqanpour, said more than 50 ambulances had been reserved to help the wounded.

Demonstrators gathered in major cities in France, the United States and Germany to condemn Iran’s crackdown on pro-democracy protesters in Tehran.

In Washington, President Obama urged the Iranian government to stop the violence against its own citizens.

Obama received intelligence briefings throughout the day and discussed the situation with senior advisers, an administration official told CNN.

On Saturday night, the Iranian state-run news agency IRINN said an attacker had been killed earlier in the day outside Tehran at the entrance to the Khomeini’s mausoleum. The agency said the man “carrying the bomb” was killed, and there were no other casualties.

Press TV had said earlier that three people, including the bomber, died at the shrine to Khomeini, the father of the Islamic Revolution that swept the shah of Iran from power in 1979. Khomeini is regarded as the founder of the Islamic Republic of Iran.

In a related development, a witness reported a fire near the French Embassy, apparently caused by debris that had been set ablaze nearby. The location is near the intersection of Vali Asr Avenue and Noufle Chateau, named for where Khomeini lived when he was in exile in Paris, France.

With international journalists restricted from covering events in the capital, Iranians were using cell phones and social networking sites to get news out. CNN was told that many protesters removed the SIM card, or memory chip, from their cell phones to prevent the government from tracing their calls.

Witnesses reported that cell phone service was cut off in the area after 5:30 p.m.

Saturday’s protests began later than had been predicted. Rallies that were to have begun about 4 p.m. (7:30 a.m. ET) did not materialize.

Many who said they planned to attend the rallies wrote early Saturday to one another on the social networking site Twitter. Some wondered whether there would be violence at the protests.

“Let the Qu’ran shield you. It’s a mortal sin to kill anyone holding the Qu’ran. BRING your Qu’ran to protest!!!” one person wrote on Twitter.

“We will try 2 keep this rally peaceful/silent as usual at every cost. Cant give them excuse 2 use force. Hope they wont,” another said.

CNN is not publishing the posters’ names for safety reasons. Both said they were in Iran, but CNN could not verify that.

Reliable information was hard to come by.The Ministry of Culture on Saturday banned international media from reporting on the demonstrations unless they receive permission from Iranian authorities. A freelance journalist said it was “very dangerous” to take pictures.

Meanwhile, the Iranian government said Saturday it is ready to randomly recount up to 10 percent of “ballot boxes.” The government agency that oversees elections, the Guardian Council, said it had received more than 600 complaints of irregularities from the three candidates.