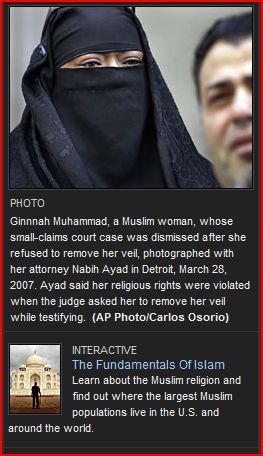 The Michigan Supreme Court voted Wednesday voted to give judges authority over how witnesses dress in court after a Muslim woman refused to remove her veil while testifying in a small claims case.

A statewide court rule letting judges regulate the appearance of witnesses, such as asking them to remove face coverings, was approved by a 5-2 vote. The dissenters said there should be an exception for people whose clothing is dictated by their religion.

Justices heard last month from a Muslim woman who sued because her small claims case was dismissed when she refused to remove her veil.

Hamtramck District Judge Paul Paruk told Ginnnah Muhammad he needed to see her face to judge her truthfulness. The 45-year-old from Detroit kept her niqab on during the 2006 hearing.

“The reason we don’t see many of these stories is that it’s absolutely fundamental in a trial for the judge and jurors and defendants to see the facial expressions of a witness who is testifying, unless that witness is in mortal danger of being identified,” said Cohen, so I think this challenge will fail.”

Some Muslim leaders interpret the Quran to require that a woman wear a headscarf, veil or burqa in the presence of a man who is not her husband or close relative.

After Muhammad sued the judge, the Michigan Judges Association and Michigan District Judges Association pressed a court rule that gave judges “reasonable” control over the appearance of parties and witnesses to observe their demeanor and ensure they can be accurately identified.

“No First Amendment right is absolute,” said Cohen, “and this one bends to other amendments which protect a defendant’s right to a fair trial, which includes allowing the judge and jury to measure the facial expressions of witnesses. So this ruling is NOT a surprise, nor particularly controversial.”

The two justices who voted against the rule Wednesday said they favored a religious exception endorsed by the American Civil Liberties Union of Michigan and religious groups.

Muhammad originally went to court to contest a $3,000 charge from a rental-car company to repair a vehicle that she said thieves had broken into.

The Detroit area is home to one of the country’s largest Muslim populations. Legal observers have said the veil flap is a cutting-edge issue that will arise elsewhere in the United States.

2 Replies to “Mich.: Witnesses May Have To Remove Veil”