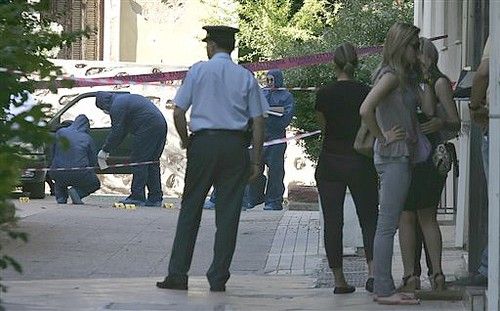 In the worst attack since riots in December launched a wave of urban guerrilla violence in Greece, the 41-year-old officer was shot several times at close range and died in his car in the densely populated Patissia area of Athens.

“It was a cold-blooded murder … they just drew their guns and murdered him,” police spokesman Panagiotis Stathis told reporters at the scene.

The recent violence has rocked Greece’s conservative government, clinging to a one-seat majority in parliament as its popularity plummets, mainly as a result of a slowing economy.

The early morning attack was similar to the shooting of a policeman in January, claimed by the Revolutionary Struggle urban guerrillas, Greece’s most militant leftist group. That officer survived the attack.

In Wednesday’s shooting, the policeman and father of one child, had just taken over a shift guarding a witness involved in a case against an urban guerrilla group.

The unidentified attackers quickly disappeared in the streets of Patissia and a manhunt was launched in the area to locate them.

Police said there was no warning or any claim of responsibility for the attack, the latest of several against the police in Greece this year.

Leftist and anarchist guerrilla groups have launched a wave of violence against police, political and business targets since a policeman shot dead a teenager in Athens in December, prompting Greece’s worst riots in decades.

There was no immediate reaction to the attack from the government.