An essay by Paul Williams CFP 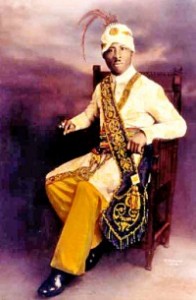 Timothy Drew (a.k.a. Noble Drew Ali)
In his speech before the University of Cairo, President Barack Obama said that Islam “has always been part of America’s story,‚” adding that Muslims have “enriched‚” the United States since the time of its founding.

Mr. Obama’s statement raises a question that few historians, let alone elected officials, have raised in the past.

Who was the first American Muslim?

Some maintain that this forgotten figure was a Moorish slave who was transported to South Carolina in 1587? This is problematic since not one scintilla of historical evidence can be used to support this assertion.

Historical evidence, however, does exist to show that Ayuiba Suleiman Diallo and Omar ibn Said were transported to the New World as slaves in 1731. But this evidence also shows that these slaves were returned to Africa in 1734.

A few Muslim writers maintain that America’s first Muslim was a Native American named Mahomet. The basis of this claim is that the name of Mahomet bears a resemblance to the name of the Prophet of Allah. The same argument, of course, could be employed to establish that Mahomet was a Mahican or a Mahayana.

If Mahomet doesn’t qualify, others argue, the title must belong to Peter Salem, a former slave who fought at the Battle of Bunker Hill. This noble figure, we are told, must have been a Muslim since “Salem‚” bears an etymological resemblance to “Salaam,‚” the Arabic word for peace. Such arguments could be used more convincingly to contend that this stalwart figure’s home was Salem, Massachusetts.

When all attempts fail to produce one believing Muslim who lived in colonial America, Islamic revisionists turn to legend and the story “Old Tom,‚” a 19th century slave on a Georgia plantation, who purportedly proclaimed on his death-bed: “Allah is God and Muhammad is his prophet.‚”

Of course, there isn’t documentation to show that “Old Tom the Mohammadan‚” ever lived, let alone uttered shahadah being giving up the ghost.

Who was America’s first Muslim?

Islam did not arrive in the New World with a boatload of black slaves or Muslim missionaries. It did not emerge from the cotton fields or the halls of ivy. Islam made its first appearance in the form of Timothy Drew, an African American conman and two-bit snake oil salesman, who popped up on a street corner in Newark, New Jersey circa 1910 as the “Savior Prophet of Allah.‚”

Timothy Drew is not a subject of black history month. He has not been the subject of a PBS documentary nor a critical biography. Most history professors, even at prestigious black universities, know little about him. But few African American leaders have cast a larger shadow. Without Drew, there would be no black leaders such as Elijah Mohammed, Malcolm X, Mukasa Dada, Stokely Carmichael, H. Rap Brown, or Louis Farrakhan; no organizations such as the Black Power Movement, the Student Nonviolent Coordinating Committee, the Death Angels, or the New Black Panthers; no rap and hip-hop artists such as Public Enemy, Ice Cube, KRS-One, X-Clan, or Lauryn Hill; and no Barack Hussein Obama.

By 1913, Timothy Drew, now known as Noble Drew Ali, managed to convince hundreds of Newark Negroes that they were not the descendants of African slaves, but the sons and daughters of Berber Moors, the very Moors who had introduced slavery to the Ivory Coast. In 1913, he opened what is reportedly the first mosque in America – – the Holy Moabite Temple of the Science of the World, also known as the Canaanite Temple. “The Moors were living up and down the Mississippi River before the European man came to them,‚” Drew told his flock. “The bananas were large and the grapes were four-in-hand. It took two men with hand sticks to carry a bunch of grapes.‚”1

No one within the Moorish Science Movement came to realize that the Prophet Muhammad viewed the black race with contempt and referred to Negroes as “raisin heads‚” several times in the Hadith (I:662; 9:256).2

The male members of the temple were required to wear an official red fez (available for $3.00), a girdle (priced at $5.00) and a robe (at the cost of $5.00).3 Women were obliged to cover their hair at all public gatherings and to augment their headpieces with a blue and oval Moorish pin (sold for $3.00). All members were encouraged to add “Bey‚” or “El‚” to their names in order to signify their Moorish descent on their membership cards (renewable yearly for $1.00).

The reception of such membership cards, Drew told his flock, represented relinquishment of their U. S. citizenship. “By being born here doesn’t make you a citizen,‚” Drew told his disciples. This claim resulted in the refusal of many temple members to comply with the Selective Service Act of 1917.

The new American Muslims were obliged to attend Friday worship services and to make payment of the monthly dues of $2.00 for men and $1 for women. They were encouraged to purchase Noble Drew’s magical elixirs – – Old Moorish Healing Oil, Moorish Blood Purifier Bath Compound, and Moorish Herbal Tea for Human Ailments for a nominal fee.4 “My remedies,‚” Drew proclaimed, “will cure you of anything you weren’t born with.‚”5 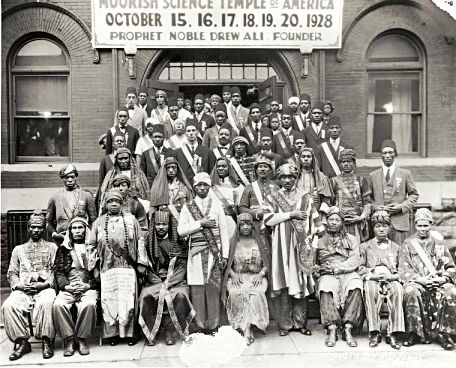 The Newark temple became so successful that the Prophet opened branch temples in Harlem, Brooklyn, Philadelphia, Pittsburgh, Cleveland, Toledo, Flint, Detroit, Indianapolis, Milwaukee, Kansas City, Norfolk, and Louisville, Kentucky.6 In 1925, Drew relocated to Chicago, where he established the central shrine of the movement on Indiana Avenue. “Chicago, Illinois is going to be our new Mecca,‚” he said.7

By 1926, when the Moorish Science Temple became a legal corporation, the movement had garnered more than 32,000 adherents. Within the next three years, a host of other temples – – 36 in all – – were established throughout the country. The temples were governed by Grand Sheikhs and “Grand Sheikhesses‚” [sic] who had been appointed by Noble Drew. One such “Grand Sheikhess‚” turned out to be Pearl Jones Ali, the aunt of one of the Noble Drew’s wives.8

By 1929, the Chicago branch of the Moorish Science Temple boasted 12,000 members; the Detroit branch 10,000. The movement operated grocery stores, clothing shops, and The Moorish Voice, a national newspaper.

A Muslim from the Middle East, who happened to stumble into one of Drew’s Moorish Temples on a Friday night, would have thought that all Bedlam or Parnassus had been let out. The temple members with their red fezzes, yellow pantaloons, and curled slippers, knew nothing of the five pillars of Islam. They prayed standing upright with two fingers lifted on one hand and five on the other. They were ignorant of the exordium and even the basmalah. They claimed that the Prophet Muhammad was a black man, even though various hadiths spoke of the whiteness of the Prophet’s skin. They fancied that the holy city of Islam was Morocco, not Mecca. They upheld shocking shirks, such as their insistence that Noble Drew was the divinely ordained prophet of Allah – – a heresy in Islam which taught that the age of the prophets had ended with the death of Muhammad. And they presented themselves as “angelic gods,‚” even though the words of the shahadah – – Ashhadu an la ilaha illa Llah (“I testify that there is no God but Allah‚”) – – represented the basis of Muslim belief. 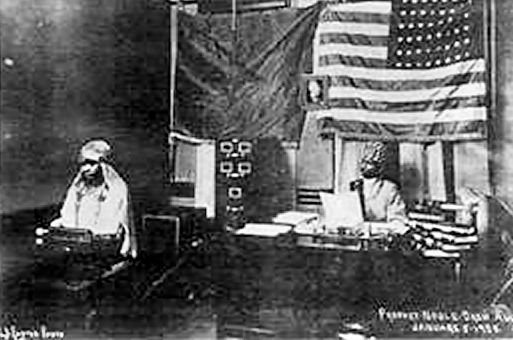 Such matters appeared to be of little concern to Drew and his followers in October 1928, when the first national convention of the Moorish Science Temple took place in Chicago. By this time, Drew’s movement boasted more than 100,000 followers, and his annual salary was listed at $36,000, a fortune at the time.9 The Prophet received additional stipends for his living expenses, including the mortgage payment for his luxurious trappings on Chicago’s south side, and the salaries for his chauffeur, maid, butler and other domestic attendants. He kept several wives, a host of concubines, and fathered, at least, twenty children.10 When he tired of one wife, he would quietly “divorce‚” her and “marry another.‚” He also kept four women at the same time and paid for each to live in separate homes

On March 12, 1929, Claude Greene Bey, Drew’s personal chauffeur, staged a coup by pronouncing himself the Grand Sheikh, stripping Drew’s headquarters of all files and furniture, and setting up a rival temple at the Unity House on the north side of Chicago, where he began to call for assassination of all whites and all Moors who objected to his leadership. Drew imported some thugs, including Ira Johnson Bey, from Pittsburgh to quell the rebellion. Three days later, Greene was shot and stabbed to death in the alleyway behind Unity House.11

Drew, while hosting a party to celebrate Greene’s demise, was arrested as an accessory to homicide. Released on bail, Drew hastily promoted David Ford-el, a.k.a. Master Fard Muhammad, as the acting head of the movement on July 20, 1929. It was not a prudent move. Fard was a criminal with 58 aliases. He had served three years in San Quentin before gaining release on May 27, 1929.12 He purchased a one-way ticket to Chicago, where he joined the Moorish Science Temple.

One month later, Noble Drew Ali was found dead at his home. The cause of his death has never been determined. Several of his followers speculated that he died as a result of injuries sustained in beatings from the police; others insisted that he had been murdered by his rivals. An autopsy was never conducted and a full-scale police investigation never conducted.

The future of Islam in America came to rest with Fard Muhammad, the acting Grand Sheikh, who had packed up his bags and headed off for Detroit to form the Nation of Islam – – a movement that gave rise to Elijah Muhammad, Malcolm X, and Muhammad Ali.

Timothy Drew – – an uneducated and unscrupulous con artist – – convinced the black community in America that Islam is their native religion and that Christianity represents the oppressive religion of the white man. At present, Islam is the fastest growing religion in America, and 90% of the converts are African Americans. 60% of these African Americans are converted to Islam in prison. Many of the temples that Drew established are now Wahhabist mosques that serve to flame the fire of jihad and to incite anti-American sentiment among the poor and disenfranchised residents of the nation’s inner-cities.