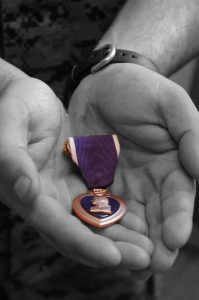 Army Pvt. William Long died from a bullet fired from a self described enemy of the United States. I only hope that Americans demand both he and Pvt. Quinton I. Ezeagwula receive proper military honors in the form of a purple heart. The only difference between these two soldiers and the rest of the fine men and women fighting Islamic fanatics overseas, is that the enemy came to them. I urge Americans not to let Obamas politically correct stance on Islam overshadow this most recent terrorist attack on Americans.

The Purple Heart is awarded in the name of the President of the United States to any member of an Armed Force who, while serving with the U.S. Armed Services after 5 April 1917, has been wounded or killed, or who has died or may hereafter die after being wounded;

(1) In any action against an enemy of the United States;

(2) In any action with an opposing armed force of a foreign country in which the Armed Forces of the United States are or have been engaged;

(3) While serving with friendly foreign forces engaged in an armed conflict against an opposing armed force in which the United States is not a belligerent party;

(4) As a result of an act of any such enemy of opposing armed forces;

(5) As the result of an act of any hostile foreign force;

(7) After 28 March 1973, as a result of military operations, while serving outside the territory of the United States as part of a peacekeeping force.

(8) After 7 December 1941, by weapon fire while directly engaged in armed conflict, regardless of the fire causing the wound.

(9) While held as a prisoner of war or while being taken captive.

b. A wound for which the award is made must have required treatment by a medical officer.

2 Replies to “Where’s the heart Obama?”