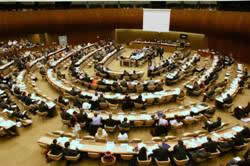 H/T Fred at GAR
If more proof were needed that the United Nations Human Rights Council (UNHRC) is a feckless, biased, intellectually corrupt haven for dictators and Islamofascists, the evidence was clearly on display this week. The UNHRC voted to affirm Sri Lanka’s right, justifiably, to self-defence from terror attacks launched against its citizens and territory by the Tamil Tigers. Indeed, the council went further, “condemning all attacks that the LTTE (Liberation Tigers of Tamil Eelam) launched on the civilian population and its practice of using civilians as human shields.” Sri Lanka had every right to protect itself, the council concluded, even at the cost of an estimated 20,000 civilian Tamil lives since the beginning of May alone.

Why, then, when Israel seeks to do the same — protect its citizens and territory from rocket and terror attacks launched from Gaza — does the very same council accuse Israel of being a “genocidal empire?” No quarter is given for the way Hamas –every bit as much a terror organization as the LTTE — hides its rocket bases and ammunition caches in schools, apartments and hospitals and launches its attacks on Israel from behind innocent human targets so that if the Israel Defense Forces wish to retaliate it is impossible for them to do so without taking civilian lives.

We are not disagreeing with the UNHRC’s assessment of Sri Lanka’s actions. Even more than Hamas and its jihadi brothers-in-arms, the Tigers were enthusiastic suicide bombers, targeting shops, public squares and Sri Lankan government offices. So proficient had they become, the Black Tigers — the LTTE’s suicide squads — could calculate how many Sri Lankans would die in their initial blasts and how many more would be cut down by flying glass and debris. After nearly three decades of fighting and at least 70,000 deaths on both sides, we sympathize with the Colombo government’s desire to bring their civil war to an end, once and for all.

Our question is merely: Why such a double standard when it comes to Israel?

Following Israel’s offensive against Gaza earlier this year, members of the council accused the Jewish state of genocide. The UNHRC struck a investigative panel that examined only Israel’s role in the fighting; it ignored the many thousands of provocative rocket attacks launched by Gazans against civilian targets in Southern Israel over the past eight years. It was silent on Hamas’s repeated use of its own people as shields against Israeli counterattacks. What the council praises Sri Lanka for doing, it roundly criticized Israel for.

Council members Cuba, Egypt, Qatar, Saudi Arabia, China and others — all states with their own spotty records on human rights — voted for both the resolution condemning Israel and the one praising Sri Lanka. Cuba — that paragon of rights defence — even moved to stop EU amendments to the Sri Lankan resolution that would have at least called on Colombo to permit relief workers into the Tamil war zone and pressured both sides to end their violence.

Earlier this year, the UNHRC expressed its solidarity with the Palestinian people and denounced Israel as the “occupying power,” even though Israel had no troops in Gaza in the three years before the most recent incursion.

Accusing Israel of human rights violations, though, seems to be the foremost reason many countries seek seats on the council — that and using their positions to shield their own human rights records from scrutiny.

This week, many Arab member-states wanted the council to go further and accuse Israel of crimes against humanity for killing 600 to 900 Palestinian civilians. We suppose the fact that they were unsuccessful is some kind of ray of hope. Still, the even-more-blatant-than-usual bias of the council, as evidenced by their different approaches toward the very similar situations in Sri Lanka and Israel, shows that neither the council nor the greater UN can be trusted when it comes to the Middle East in particular and human rights in general.