Well, I suppose the good news is, Hugo’s reign of error can’t last more than another 90 odd years cause that is about the limit any nation which ignores the rules of nature in terms of the real world costs to grow food can last and that would be by parisitizing it’s neighbors. As Columbia will undoubtedly resist having Chavez invade and take its food stuffs as will Brazil and even British Guiana despite Guiana appearing as ‘Zona De Reclamation’ on Venezuelan maps. Once a leader starts telling plants where how fast and how high to grow and under what conditions, communism always ends. An economy begins and ends at agriculture. Maybe you can make workers do double time for half wages at the point of a gun as commies always do, but wheat doesn’t give a damn. Neither does rice. Good luck Hugo and good riddance. Better sooner than later. 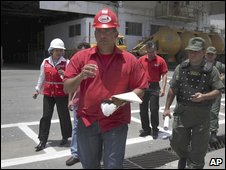 Venezuela says the plant, owned by the big US firm Cargill, had violated regulations on price controls intended to guarantee cheap food for the poor. The move further increases President Hugo Chavez’s hold on the economy, after a series of recent take-overs of private and foreign-owned businesses. They include a Cargill rice plant, and services companies in the oil industry.

Deputy Food Minister Rafael Coronado said the government would run the factory for 90 days, and would reassess the situation after that. He said it has not been producing sufficient quantities of a type of pasta sold at cheap, government-established prices.

The Cargill rice mill, taken over by the government for not producing rice covered by price controls, was similarly taken over this year. It was nationalised last March. Cargill had said it did not break the government’s pricing rules on rice because the mill did not produce the plain rice which is regulated.

Venezuela has set quotas and prices for 12 basic foods including rice, powdered milk, cheese and tomato sauce. Under the measure, 80% of all rice produced must be basic white rice. The measure also includes 95% of all cooking oil, coffee and sugar.

Last week Mr Chavez sent troops to take over oil service companies including hundreds of supply boats, and two American owned gas facilities. He nationalised Venezuela’s oil reserves, one of the largest in the Americas, two years ago.