In 2010 Israel claims it will have its “iron Dome” operational. A system which claims it can shoot down incoming missiles. Of course this is an exceptional answer to a problem nearly uniquely Israel’s in the sense that if any other nation on earth experienced over five thousand missile attacks on its civilians and schools etc. within a few years everyone would have expected them to fight back. However Israel is expected to basically do nothing but apologize for being in the way of enemy attacks.

When Israel built a wall to stop waves of suicide bombers (which by the way was very effective) the world community loudly condemned Israel for creating an ‘apartheid’ state while ignoring the walls used to shut out Iraq in Saudi Arabia, USA Mexico, China, Egypt Jordan and many other places walls are used to protect one group from a hostile neighbor.  Sooner or later, I expect Israel to be indicted for war crimes for causing cancer in Palestinians when they called everyone in Gaza to warn of attacks on their cell phones. 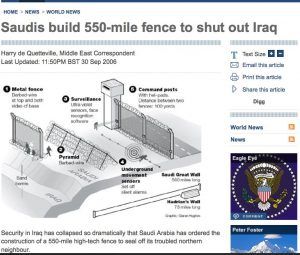 Now for the contest:

I will give a Larry Curly and Mohamed T shirt to the first person who comes up with the reasoning the world media, UN, academia and so on use to claim that Iron Dome, the system to shoot down incoming terrorist missiles is somehow a crime against humanity and an act of evil etc. etc. ad nauseum.

Please post your predictions in the comments. I will contact the winner by email so long as the winner does not work for an MSM media outlet who is in fact predicting his own article. Friends and family can feel free to play.

All speculation must be posted within 2 months of deployment of Iron Dome or before the first protest takes place in front of the Israeli Consulate in Toronto.

10 Replies to “Contest for Vlad readers.”